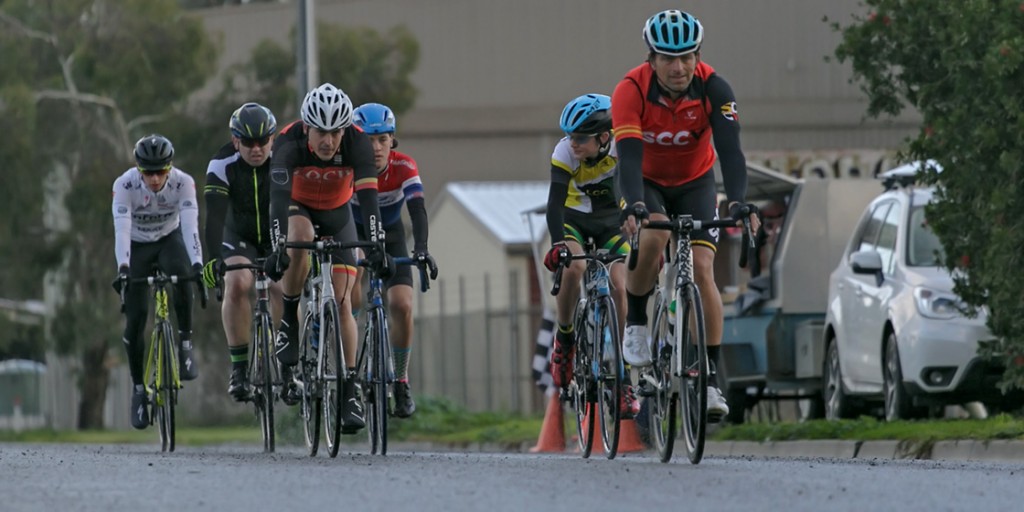 Club racing was held on Sunday as the Club raced a criterium circuit at the Leongatha Industrial Estate for the first time in probably 30 years.  Unfortunately Sunday morning saw several showers pass through at assembly time discouraging some starters.  In addition the Club had several members competing at Warrnambool over the weekend.  However, those that participated all felt that it was great to have a good circuit race again.

In the A division the field was only small but packed some good quality with Thomas McFarlane just back from a holiday in Europe watching some of the big Pro tour autumn classics.  The riders faced a 30 minute test plus 2 laps and the regular surges by several riders saw all the competitors with some effort showing on their faces.  At the 2 lap to go mark, Thomas McFarlane surged to the lead and had the others chasing.  Ollie McLean made the most of the chase but was still down by 30m at the finish and was left with 2nd to Thomas.  Steve Allen kept the power on to claim 3rd, followed by Dylan Adams who had made some of the early running.  Next in was Morgan Barnes who found the regular change in tempo difficult to handle.  He was followed by Thomas Fitzgerald.

“Early in the race Greg Bradshaw was setting the pace with Kaleb Jans marking his efforts and Jack Allen sitting just off the pace.”

In the B grade race, the club saw a road racing start by Caleb Murphy.  However, with around 9 weeks since track finished his form was not adequate to go with the field.  The Club is also hoping that Jack Mitchell can get a start shortly since recovering from his track season fall.  The B grade riders raced for 25min plus 2 laps.  Early in the race Greg Bradshaw was setting the pace with Kaleb Jans marking his efforts and Jack Allen sitting just off the pace.  The 800m circuit had a long downhill side but on Sunday this edge of the circuit had a slight head wind so riders did not get great benefit from the descent.  With 2 laps to go Kaleb Jans jumped out to a lead which he kept to the line.  However, Jack Allen responded better than Greg and was able to take second place even though he had not looked a contender for most of the race.  Greg followed in for 3rd and Caleb Murphy finished for 4th.

Next Saturday afternoon the racing is with the Warragul club at the Cloverlea circuit whilst some of the juniors will be racing at the Ararat Junior Tour.
Lindsay