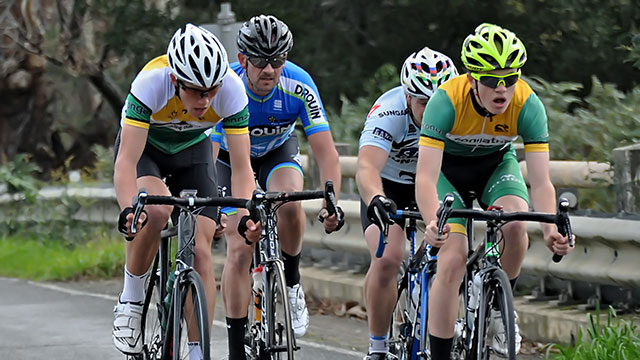 The Leongatha club riders were joined by some of the Warragul Club riders on Saturday for the race through Nerrena and Mardan hills with great weather conditions prevailing.  The handicapper had 24 riders to sort for the 38km race.  With out-markers at 20min and 15 min before an 8 rider bunch at 9min ahead of a 5 rider bunch at 6min, 4 at 4min and a quality scratch field of 4 riders it was set up for a great ride.  As usual, the run up the 6km climb to Mardan sorted out the race.

Bernadette Fitzgerald (15) was doing a good job and at the head of affairs as the riders came up Greys Hill at Mardan with Leigh Stott (9) and Jason Tabnor (9) closing quickly.  At around 500m behind there was a group of 7 riders remaining out of the 6min and 4 min bunches whilst Austin Timmins (4min) was out of luck with a puncture.  Behind in the scratch bunch Cyrus Monk from Warragul had opened a gap and was chasing hard.  Cyrus is riding with The African Wildlife Safaris team in the National Cycling Series and had recently placed in the top 10 in one of the National races so was in good form.

Over O’Shanaughsy’s hill it was a bunch of 7 riders swapping turns. However, if they had checked behind they would have seen Cyrus some 300m behind.  At the turn into Horn St, just over 1.5km to the finish Cyrus caught and passed the bunch to solo in for a clear win and fastest time – 57.48min. The bunch finished in “indian” file across the uphill finish at the school crossing in Horn St, with a whitewash by the Warragul riders – Peter Finlayson (6min) 2nd, Rob Monk (6min) 3rd.  Best Leongatha rider was Harrison McLean (4min) in 4th.  In 5th was Ross Henry (Wgl-6min), 6th was Leigh Stott (9min), 7th Justin Gravatt (Wgl 6min), 8th Gary Campbell (9min), 9th Jason Tabnor (Wgl 9 min) whilst David Salton (Wgl, scr) lead in the scratch bunch in 59.07 sec at 10th, having lost 1min 19 sec from Mardan back in to Leongatha on Cyrus Monk.

Mitch, Thomas and Felicity on their way back…

In the Junior race over 14km on an out and back run on the Nerrena Rd, Thomas Fitzgerald and Mitch Harry (3.30min) supported each other well as they chased down the 4 riders in front and stayed away from the lone scratch rider – Oliver McLean- to be clearly in front at the line.  The uphill run to the finish at the Ecacentre driveway saw Thomas take the win from Mitch in a time of 30.05min.  Next home was Kaleb Jans (4.30min).  In 4th was limit rider Felicity Waddell (6min).  Next home in 5th and fastest was Oliver McLean (29.10) whilst new rider, Alfie Herbert was 6th and Sullivan Herbert was 7th.

Next weeks racing is at Korrine whilst Tuesday night there is club meeting at the McFarlane household.  Para cyclist – Alex Walsh – has won gold in the H3 division – in the Time Trial and Road race.  Alex is a hand cyclist and pilots a low slung sled around at great speed and had a successful National Title campaign. 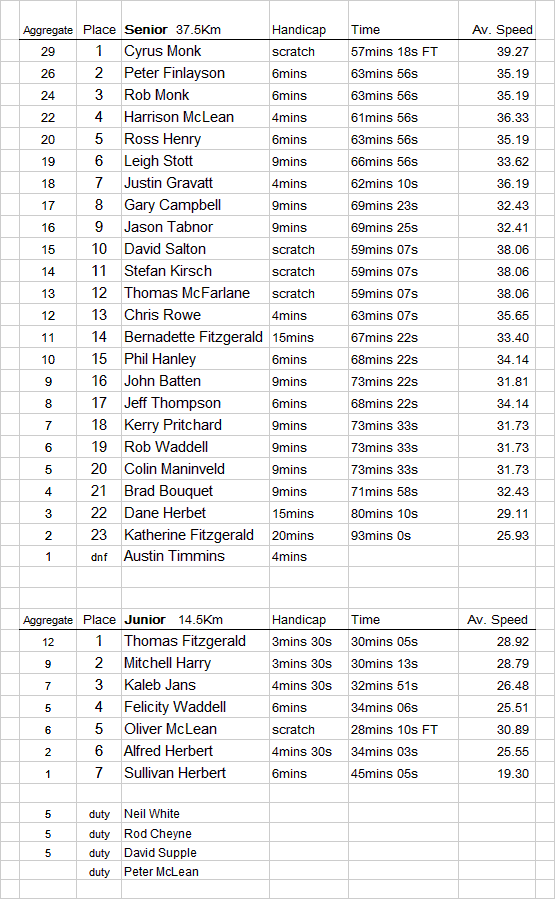