The Club had another good winter’s day for the running of the George Martin Trophy around the tough Nerrena-Mardan circuit – some sun, weak but cold wind.  The 22 starters included paracyclist Alex Welsh who uses a hand cycle sled, even up the big climb from Dumbalk to Mardan.  Alex has State time trial race at Outtrim on July 18 so this was a solid work out for him.  The trio of scratch riders – Brett, Stefan and Will were chasing 3 on 3min, 3 on 6 min, 6 riders on 8 min, 4 riders on 13min, a duo on 18min and Alex on 30min.

As usual with this circuit it is only the fit who manage to make it up the big climbs and get through to the finish.  Chris Rowe and Luke Morrison from the 6 min trio were the big movers for the day as they rounded up the 8 min bunch survivors and the survivors of the 13minute bunch plus the limit riders.  They did not catch Alex until the hills up Horn St.  However there were just 6 riders to contest the dash to the line and it was Chris Rowe taking the honours (1hr 6.08min) from Michael Park (8min), Phil Hanley (8min), Luke Morrison, Bernadette Fitzgerald (13) and Mark Bensley (13) in 6th place.  The next trio home were Harrison McLean (3), 7th, Peter Hollins (3) 8th and scratch rider Brett Franklin 9th and in a time of 1h and 56 sec.  Rounding out the top 10 was Alex Welsh in a time of 1hr 31.46min.

The junior race was on the out and back run through Nerrena to the Meeniyan turn-off over a distance just short of 20km.  Oliver McLean riding from Scratch had 8 riders to catch with Harry Herbert and Max Slinger on 9min 30sec.  After several weeks of not being able to quite stick with Thomas Fitzgerald on second scratch Mitch Harry was lifted one bunch to start with Kaleb Jans at 3min.  Whilst at the start, the helpers saw that Mitch’s tyres were on the flat side so a quick pump and he was on his way.  This obviously did wonders as he and Kaleb chased hard, passing the other 5 riders in front.  Mitch was going so well he dropped Kaleb on the hills back into Leongatha to come home first and fastest (41.13min).  Next home was Harry Herbert(9.30min) who also rode a fantastic race and actually going quicker than his older brothers and making life very difficult for the handicapper, Kaleb rolled in for 3rd.  Sullivan Herbert came home in 4th, Oliver McLean 5th and some 30 sec slower than his last ride on this course, Alfie Herbert 6th, Thomas Fiztgerald 7th, Max Slinger 8th and Michael Eastwood 9th.

Next week the Club road championships will be raced at Korrine with the riders competing in age bracket titles.  The senior field is scheduled for 3 laps whilst other groups will ride 2 and 1 lap of the 18km circuit.  Hopefully the weather will again be favourable. 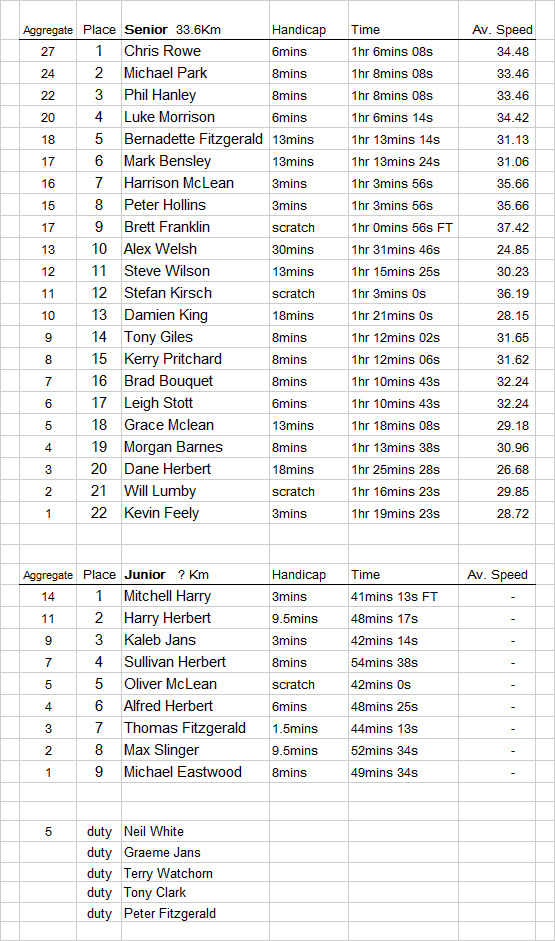