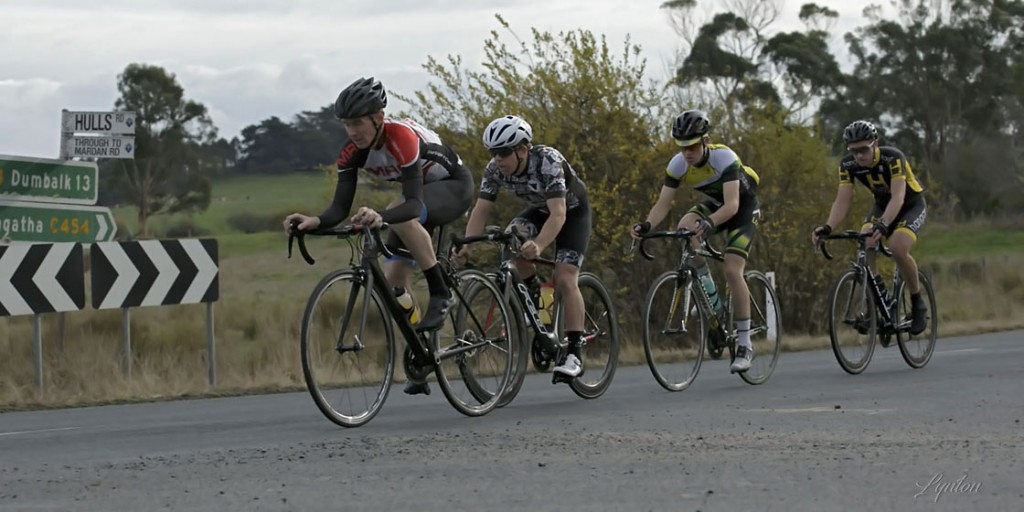 The scratch bunch as they head towards Nerrena.
(25 event images)

There was fine weather and a good turnout of riders for the George Martin Trophy race – a handicap race around the testing Mardan circuit, starting at the Leongatha Secondary College.

It was good to see a couple of visitors, Brian Sing and Jason Strickland there for racing along with Austin Timmins back for his first race of the season joining in to make the racing a little more competitive.  Rod Cheyne was out and about again, helping out with corner marshalling along with Terry Watchorn and Peter Fitzgerald.

Congratulations to Brett Franklin on his narrow win in a sprint finish over Harry McLean to take the trophy home posting a time of one hour, 1.23 minutes at an average speed of 36.95 km/h.  Franklin has now won this title three times.  The first in 1999 and another in 2005.  Ollie McLean finished third, followed by Tom Fitzgerald fourth, Brian Sing fifth, Chris Rowe sixth, Michael Park, seventh, Bernadette Fitzgerald eighth, Tony Giles, ninth and Kerry Pritchard rounding out the top ten.