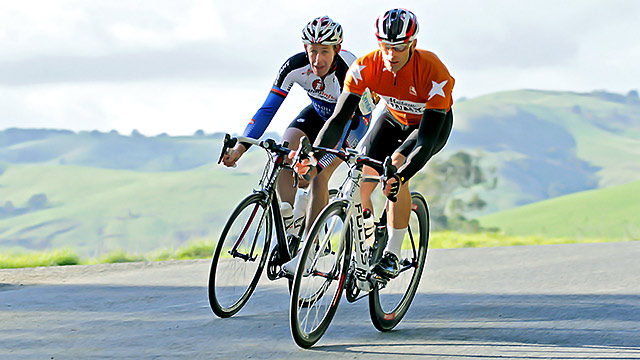 Racing on Saturday was around the tough Leongatha North circuit. Riders were pleased to be able to get a dry day following the week of wet weather. There were 14 starters for the 2 lap race including a number who had ridden the previous weekends 3 day tour. These riders were probably happy to have a couple of days recovery after the 3 day tour so were raring to go for Saturday.

Lone scratch rider Brett Franklin was chasing Peter Hollins and Clem Fries on 2 minutes, a group of 5 riders on 5 minutes, a further quartet on 9 minutes and a sole limit rider on 16 minutes. At the end of the first lap the limit rider retired injured but Brad Bouquet and Kerry Pritchard were riding well up front. Steve Wilson was having wheel trouble and some were having trouble with the hills. The five minute bunch had lost one rider up the hill and had cut their chase down by several minutes but were also under pressure from Peter Hollins and Clem Fries as well as Brett Franklin who had climbed the hill well.

From the start point at the tennis courts at Leongatha North it is a largely down hill run into Leongatha. However, the wind was blowing from the south east so the run into town was not the usual fast run. The outcome was good for the handicapper as the field were all on the last of the climb back up to Leongatha North at various points.

“Brad and Kerry were doing their best to grab the win”

Brad and Kerry were doing their best to grab the win but a surging Clem and Peter rode through the field to gather up the leaders by the top of the climb. Clem was the first to surge for the finish line and had enough in hand to cross a clear winner from Peter and Brad. Kerry crossed shortly after for 4th. Next home was Neil White just ahead of a hard working Brett Franklin in 6th and fastest – 53.20minutes and just 20 seconds down on the winners. Lochie Matthews claimed 7th just ahead of Phil Hanley, Chris Rowe and Steve Wilson in 10 th place.

In the Junior division we had riders racing at Shepparton, leaving just 2 starters, to race 1 lap. Alex Bennett raced of on 6 minutes ahead of Austin Timmins on scratch. Alex likes the circuit and made the most of his start to get the win with 30 sec to spare.