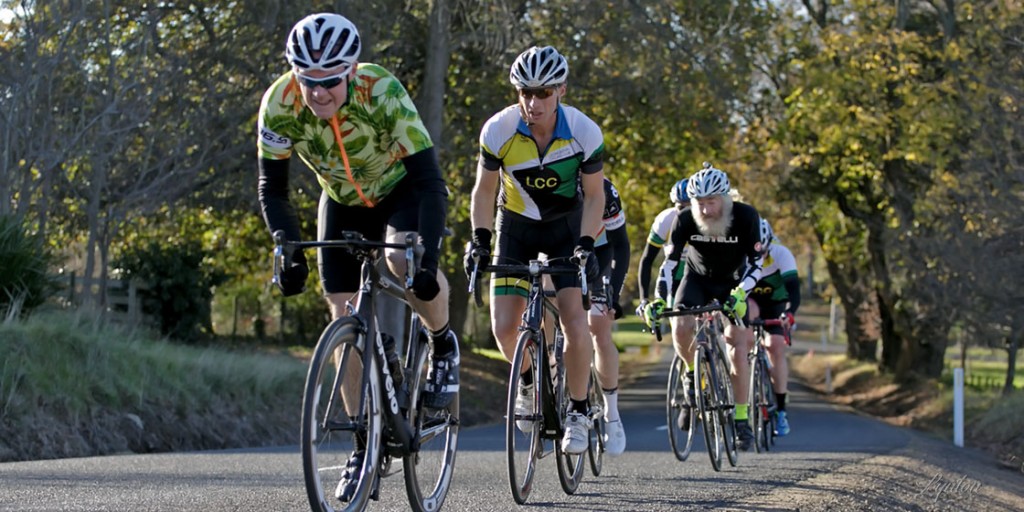 The 9min bunch on the return through Wooreen. (19 event images)

Club racing on Saturday was held at Leongatha North over an out-and-back course to Trida totalling 38 Kilometres.  The fine sunny afternoon with a lazy north-west breeze attracted 20 riders including two from the Warragul club.

The senior handicap event was made up of four groups.  On the 22min limit was Peter McLean and Alex Welsh followed by Tony Giles and Kerry Pritchard on 15min. on nine minutes there were six riders comprising Leigh Stott, Damien King, Morgan Barnes, Dylan Adams, Michael Park, plus Geoff Thomson and Bryce Edhouse from Warragul.  On scratch with task of chasing down the handicaps were Brett Franklin, Thomas McFarlane, Will Lumby, Harrison McLean with Clem Fries and Stefan Kirsch riding with the club for the first time this season.

After the long uphill climb through Wooreen to the turnaround at Canavan’s road on the Grand ridge road Trida, it was Peter McLean who made the turn first despite wanting ride on further.  Alex Welsh hand powering his way was next, followed by the duo of Tony Giles and Kerry Pritchard encouraging each other for downhill return.  The other groups made the turn with no change to the overall order.  On the return through Wooreen it was Alex with a 30sec lead over Peter and they were still out in front of the main field.  Tony and Kerry had been picked up by the nine minute bunch with the scratch bunch still 3min 20secs in arrears.

The three kilometres of uphill to the finish sorted out the riders.  It was the nine minute handicap bunch that prevailed with Leigh Stott taking the win from Bryce Edhouse who edged out Geoff Thomson across the line for third, both from Warragul.  In fourth place was Damien King, fifth Tony Giles.  Next across the line was Stefan Kirsch the best of the scratch bunch taking fastest time in sixth ahead of Thomas McFarlane and Brett Franklin with Harrison McLean a close ninth.

“Greg with a show of good form rode away…”

The junior handicap with just three riders rode an 18Km out-and-back over the same course.  Kaleb Jans on scratch gave away a 10 minute handicap to Greg Bradshaw and Caleb Murphy on limit.  Greg with a show of good form rode away from Caleb Murphy, going on to win with Kaleb Jans not able to bridge Greg’s handicap coming in second with Caleb Murphy third.

Over the weekend Leongatha juniors Oliver McLean, Felicity Waddell and Thomas Fitzgerald put in solid performances at the Blackburn junior tour held at Casey Fields on Saturday and road race at Main Ridge on Sunday.  Thomas Fitzgerald finished with a commendable third overall in the general classification U/M17b category.

Next week the racing is at Tarwin Lower.