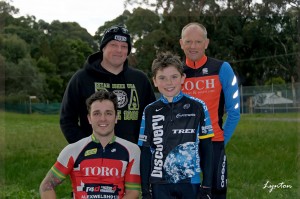 It was a cool and windless day for Club racing on Saturday over a new out-and-back course from Leongatha North through Wooreen to Trida on the Grand Ridge road. The field was limited with Club members competing at the Victorian Junior Road titles in Wangaratta over the weekend.

In the senior event, riders were turned around at Canavans road Trida, some 18.9Kms from the start and featured more than 450 metres of climbing elevation over the entire course. On scratch was a group of four riders which consisted of Steve Allen, Chris Rowe, Leigh Stott and Gavin Slavin. They were chasing a duo of Brad Bouquet and Mark Bensley on seven minutes with a further seven minutes to the next group of Peter Lewis, Damien King and Graham Jans on 14mins. On the limit of 20 minutes was para-cyclist Alex Welsh back to test the field after his win last week.

All rider groups held their relative position to each other on the easy downhill start, but it was short lived after crossing the Wilkur creek with the long haul up through Wooreen to the Grand Ridge road. Gavin from the scratch group lost contact during this period and Leigh dropped his chain causing anxiety as whether to wait for these riders or forge ahead. As it turned out they lost time, leaving them too far back to figure at the finish line. Damien (14mins) had broken away from the other two riders his group and had Alex in his sights for the downhill run home. Although Alex was caught and passed by Damien he was still within contact with 3.5Kms of uphill remaining to the finish line. Damien King won the event with Alex Welsh 1min36s behind, third was Brad Bouquet, fourth Mark Bensley, fifth Steve Allen, sixth Leigh Stott, seventh Chris Rowe, eight Graham Jans. Fastest time (1hr 7m30s) went to Steve Allen.

The B grade riders rode over the same course but they were turned at 8.2Kms for the return journey. With only three contesting it was Kaleb Jans on scratch making amends after puncturing last week who overcame the riders ahead, winning from Jack Allen on 2mins and limit rider Greg Bradshaw.

At the Victorian Junior Road championships at Wangaratta on the weekend Leongatha riders acquitted themselves well with Bernadette winning both the JW19 ITT and Road race championships. Oliver riding in the JM15 Road race finished third in the sprint to the line.

Next week the racing is on Sunday at Woolamai starting at 9.30am.