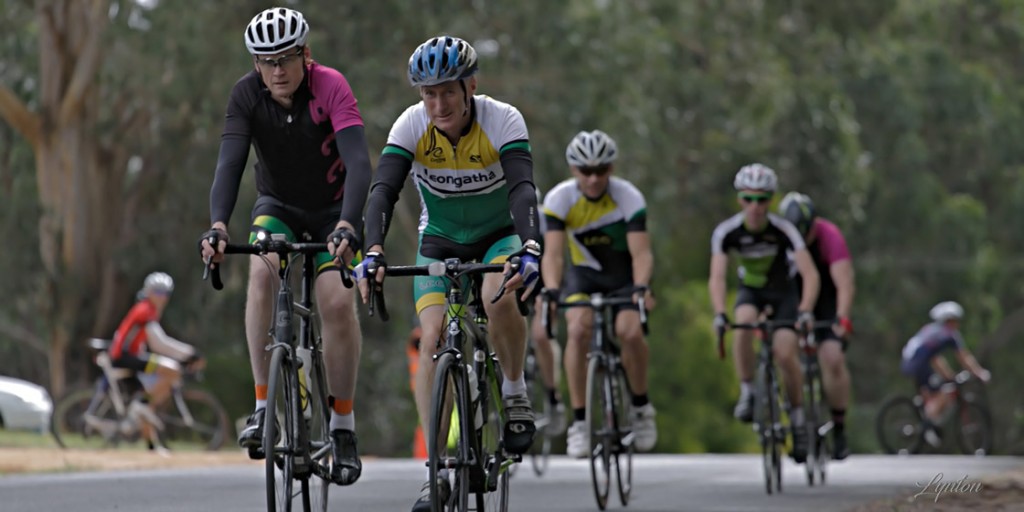 The 2017 Leongatha Cycling club Road season started on Saturday with racing from Leongatha North out toward Trida and return.  The riders had a strong and gusty southerly blowing which was great for the climbing out to the turn.  However, one of the riders was blown onto the grass on two occasions across the Grand Ridge Rd.

The officials decided that on the basis of the entries it would be better to run a handicap event than graded scratch races so the 16 riders were split into 3 on scratch – Will Lumby, Harrison McLean and Brett Franklin, chasing 7 minutes to the next bunch of 5 riders.  It was a further 5 minutes out to another group of 5 riders whilst on 18minutes we had the old (Greg Bradshaw) and the young (Kaleb Jans) all facing up to a stiff 38km test.  It should be noted that the 12 minute bunch featured 3 female riders – outnumbering the males in the bunch.

The 12 minute bunch saw Kobi Merchant ride away from the bunch just after turning on to Yarragon Rd.  Kobi soloed out to the turn, picking up the limit riders and holding a 2min gap back to Bernadette Fitzgerald and Kerry Pritchard whilst the scratch bunch were motoring along well and had rounded up the seven minute bunch.  All the field turned within 4 minutes but were spread out in ones and twos.

The return ride features plenty of fast downhill runs and the scratch group plus Leigh Stott from the 7 minute group were flying along at speeds between 50 and 60 kph and quickly chasing down the field.  By the time they reached the old Wooreen school corner they had caught Bernadette and Kerry with just Kobi not far ahead.  Unfortunately for the riders there is 100m of climbing from Wilkur Creek back up to Leongatha North.  This climbing saw the scratch trio drop all the others and a sprint to the line to settle the result.  Brett Franklin had done most of the work during the ride and could not match Will Lumby over the last pinch.  Will rode to the line a clear winner ahead of Harrison and Brett.  His time was a slick 1hr 3min 35 sec. for first and fastest.

Kaleb Jans broke the chain on the run down the hills and managed to twist the derailleur hanger.  He was pleased to see Morgan (Wheelheat Wonthaggi) still at the finish so he could work on his bike and get a smile on his face after a disappointing day.

This weekend the top juniors were racing at Bright.  Next Saturday racing is at Kernot.  However the numbers may be down as the Baw Baw Cycle classic is being raced from Warragul to the top of Mt Baw Baw.  This is not a race for the average weekend punter as the climb up the mountain is one of the toughest in the State.  The junior riders need to get to Kernot and get some practice in ready for the junior tour at the end of April.