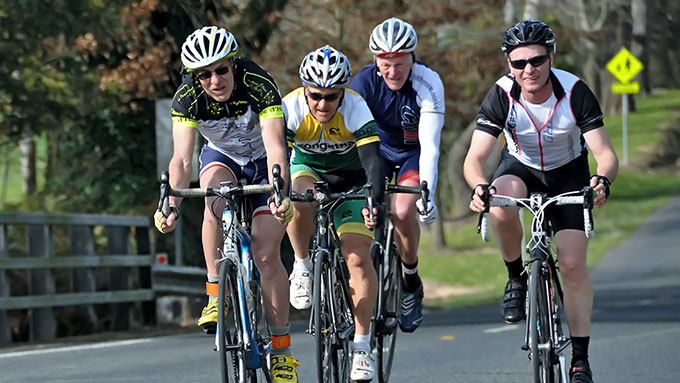 Racing was from Outtrim on Saturday and riders were able to enjoy a sunny afternoon with light north westerly winds blowing as they raced through Kongwak, Lance creek, Wattle Bank and finished 2km up Mt Misery at the saddle.  A circuit with some early hills before a tail wind run along Lynnes Rd and then struggle for the finish line.

The lone scratch rider – Brett Franklin, was chasing 18min to the lone limit marker – Dane Herbert.  In between there were 4 riders on 12 min, 4 riders on 6 minutes and a duo on 3 min.  By the time the riders were nearing the half way point at West Creek Rd it was still Dane going well with a handy lead.  The chasing quartet were getting a little ragged on the climb to the turn but also still had a handy margin to the next foursome.  Harrison McLean was suffering from the cold and had lost the wheel of Austin Timmins who was just caught by the scratch rider at this point but they were still several minutes down.

Some power riding along Lynnes Rd saw the field come together save for Dane powering along out front.  Brett managed to ride through the field and get Dane in sight but could not nail the few seconds gap before the finish line so it was an all the way win for Dane, 2nd and fastest time for Brett (1 hr 7 min 42 sec).  Next home was Leigh Stott (6 min) for 3rd. Neil White (12min) finished well for 4th, ahead of Kerry Pritchard (12) and Rob Waddell (12). They were followed in by Michael Park (6min) 7th, Bernadette Fitzgerald (6min) 8th, Morgan Barnes (6min) 9th and Austin Timmins in 10th.

The junior riders raced over 20km – racing for 3km toward Leongatha South before heading westward for 9km prior to another 180 degree turn for the run back to Outtrim and then up the hill for the finish. The lone scratch rider – Oliver McLean, was suffering from a cold and was giving a 2 min start to a trio of riders – Thomas Fitzgerald, Kaleb Jans and Mitch Harry.  At 4 min there was Alfie Herbert whilst on 6 min there was Sullivan Herbert and Felicity Waddell and on limit at 11 min it was Max Slinger.  It does not take much to take the edge of the performance as Oliver found out.  Thomas Fitzgerald was able to ride away from his co-markers up the hill catching all the field to go through for first and fastest – 42.30min. Next home was Kaleb Jans and then Oliver McLean at 42.49 – 19 sec out of fastest time.  In 4th place was Mitch Harry, then Felicity Waddell, Max Slinger and Alfie and Sulli Herbert.

Next week the racing is at Pound Creek. The seniors race for the McIndoe Cup with 2 laps around the circuit. The juniors will race 1 lap. Next weekend is the last race day. September is given over to some training rides. 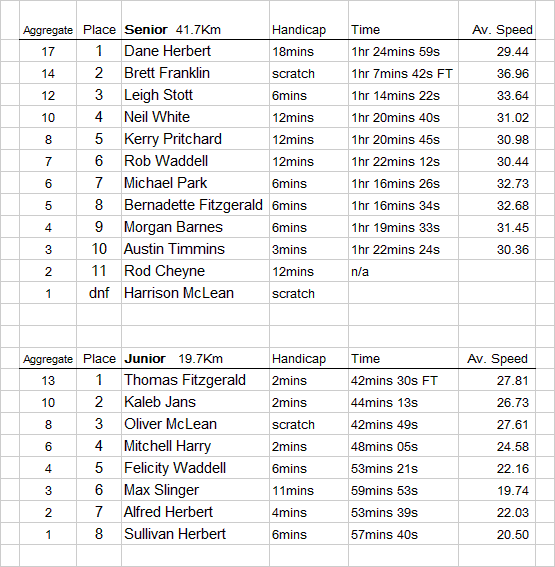