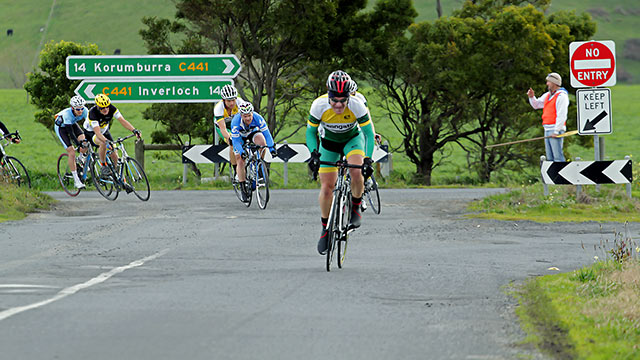 Phil leads the field into Stewarts road at Kongwak

Club racing was held from the Outtrim recreation reserve on Saturday. Whilst the day was fine there was a solid north-west wind blowing. The seniors raced through Kongwak and West Creek over a course which featured several climbs early in the race followed by a generally flat run back to Outtrim. There were seventeen starters early in the afternoon but Rod Cheney hit a wind blown branch and fell and needed the ambulance to assist. That delayed the start and upset the afternoon’s plans.

The senior field had Stuart Smith and Brett Franklin on scratch and chasing 4 minutes to Kevin Feely, Tom and Dave McFarlane and Peter Hollins. Further out on 6 minutes there was a bunch of 5 riders. At 9.00 minutes there were 2 riders whilst limit 13 minutes had three riders – Steve Wilson, Tony Giles and Dave Bennett. The first climb of the day is the steep pinch up to the T intersection of the Inverloch Rd and the Korumburra Rd just to the east of Kongwak. The bunches all passed through this intersection in order. This left them the run through Kongwak and up to the Glen Alvie corner before the run down through Korrine and toward Wonthaggi. Again the riders were keeping together and the tail wind and flat going through West Creek helped in this intent. However, it saw some high speeds so that at the Lynnes Rd-Inverloch Rd intersection there was just Steve Wilson and Tony Giles with only around 1min lead with the other bunches almost together as they made the turn.

By the time the riders reached the right hand turn for the back to Outtrim the field was all together and facing some cross winds. The back markers were quick to take advantage of this and Stuart Smith, Brett Franklin and Tom McFarlane moved away from the other riders and held a 100m gap to the finish at the Reserve. The dash to the line saw Stuart claim the win from Tom McFarlane and Brett Franklin. The time for the journey was a slick 1.00.36hr. The chasing bunch was lead home by Peter Hollins for 4th, followed by Brad Bouquet, Kevin Feely, Steve Allen, Dave McFarlane, Chris Rowe and Tony Clark rounding out the top 10.

The junior race was raced 3 km toward Leongatha South before returning past the Reserve and racing out to the Inverloch Rd and back. Alex Bennet started on 6.00min and was followed by Aaron Fraser and Sam Warren (Melbourne) on 2 minutes with Matt Minogue and Austin Timmins on Scratch. After having chased for several weeks and failing to catch all the riders, Austin was able to salute the judges with a first and fastest ride in a time of 31.09. Sam Warren, the son of a former club champion, Paul Warren, showed some good form as he managed to go with the scratch rider and only lost contact on the climb to the finish and hence grab second. Next home was Matt Minogue followed by Alex Bennett and Aaron Fraser.

The Club has a monthly meeting at the Love residence on Tuesday night. Next weekend is the last handicap for the season with racing from Korrine.