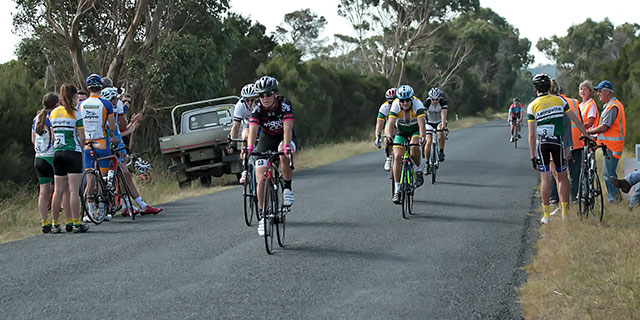 Grace claims the win in ‘B’ grade (27 event images)

The 2015 road season started on Saturday with racing at Pound Creek.  It was a windy and warm first day and there was a good roll up of riders.  The senior entrants were split into an ‘A” grade group of 13 riders and a “B” group of 8 riders.  Both groups raced a 2 lap scratch race totaling 48 km around the undulating circuit.  The junior riders, including 3 having their first go on the road, raced a 9km time trial on an out and back run on the Pound Creek Rd.

In the A grade race there were some classy riders in action and the pace was on right from the start.  The tail wind on the run toward Tarwin Lower saw the bunch at speeds of 50km/hr.  The turn up the hills toward Koonwarra was no relief as the attacks quickly came.  Stefan Kirsch and Brett Franklin were ensuring a high tempo outing.  Thomas McFarlane, Will Lumby, Clem Fries and Peter Hollins were keeping the gaps manageable.  However, Peter’s day ended shortly after with a puncture.  The run back past the golf course saw the bunch down to just 7 riders.  The last lap saw the bunch shrink further still with just 5 left to contest the sprint.  In a high speed dash to the line it was Thomas McFarlane winning comfortably from Stefan Kirsch, Brett Franklin, Clem Fries and Will Lumby.  The winning time was 1hr 22.43min. Jesse Boyd came home in 6th, Harrison McLean 7th, Austin Timmins8th, Tony Smith 9th and Morgan Barnes 10th.

In the “B” grade scratch race, the pace was consistent without all the attacks of the A grade field.  However Matt Winchester and Katherine Fitzgerald found their legs were not ready for the challenge.  Bernadette Fitzgerald took pity on sister Katherine and gave her plenty of encouragement to get a work out in.  The 5 riders left wall present when it came to the dash for the line.  In a nice finish Grace McLean, the youngest in the field, scored the win from the oldest in the field, Kerry Pritchard.  Next home was Steve Wilson, followed by Gary Campbell and another new rider Leigh Stott.

The Junior time trial is about to get underway.

Next week racing will start at the Outtrim reserve.  Seniors will race through Kongwak and WattleBank whilst the juniors will have another out and back run toward Leongatha South.  It is a good time for any riders to start the season as riders are still getting into the swing of road racing.  Riders need to be at Outtrim by Sat 1.00pm.

The last weekend of the month the club will be hosting the Bendigo Bank Inverloch Branch Junior Experience weekend.  The club is expecting around 80 riders for that weekend with the Saturday racing at Wonthaggi and the Sunday at Outtrim.

Riders are reminded there is a Club meeting on Tuesday night. Check the web page for details. 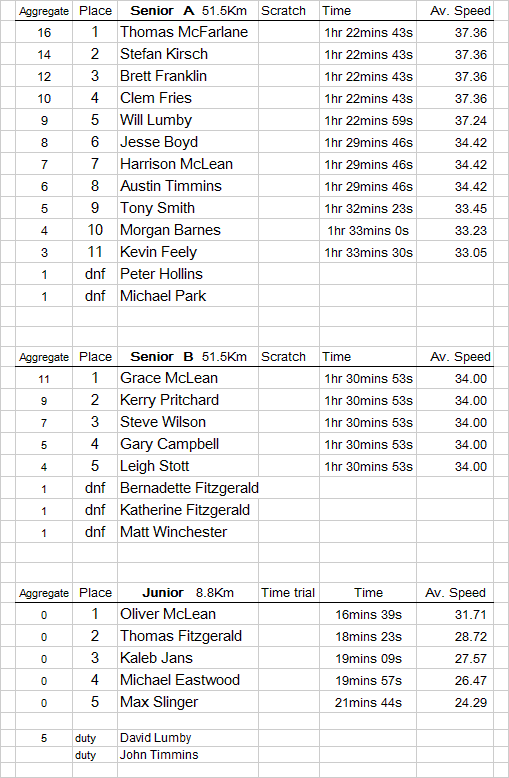