Club racing moved to Sunday morning over the weekend as a trial which was handy for Austin Timmins and Oliver McLean as they were able to race at the Country Titles at Harcourt on Saturday. Austin had a great day as he won the Men 17 age group title with a break away ride. Oliver placed third in the Men 15 age group event. Both riders were back in action on Sunday morning and showing no ill effects – Austin winning the A Grade scratch race and Oliver the B grade race. Also in action at Harcourt and being successful were Grace McLean, 3rd in Women 17 age group and Rod Cheyne 2nd in Masters 8 age division. There were several others who also rode well but missed on the Podium.

The Sunday morning race time was an effort to evaluate the Pound Creek course at a different time and day to our past efforts with the circuit as Club members were concerned about the traffic volumes using the road through Pound Creek. Unfortunately the changes did not make sufficient difference and Sunday was probably our last race day using that circuit. That will probably be confirmed at the Tuesday night meeting. It is also an important meeting on Tuesday night as the Club needs to fill some casual committee member vacancies.

The A grade field of 11 riders was a pretty strong bunch of junior riders with several more seniors having a big job going with the younger brigade. Darcy O’Connor on the back of his B grade win was also promoted. The race was over 2 laps of the circuit starting at Pound Creek. After the first lap where all the riders had swapped turns on the front of the bunch the action really began as the started the climbs up the hill toward Koonwarra. Whilst not being major hills they do enough to hurt the legs. Several riders lost contact with the leaders. The later climb up the Golf Course hill on the Koonwarra-Inverloch was the decider with Austin breaking the shackles and leaving the field strung out with each rider on their own. The judging was easy – 1st, Austin, 2nd Thomas McFarlane, 3rd Will Lumby. From their it was Harrison McLean, Leigh Stott, Steve Allen, Dave Supple, Darcy O’Connor, Gavin Slavin, Chris Rowe and Dylan Adams.

The 9 rider B grade field also had 2 laps to tackle. However, the first lap saw 2 riders lose contact with the bunch. On the second lap Oliver again attacked and road away from the field. Kobi Merchant tried to go with him but went too deep into her energy levels and paid the price as the other members of the field rode past as she was trying to recover. The end result was a clear win to Oliver. Bernadette Fitzgerald was next home in a sprint finish ahead of Kerry Pritchard and Tony Giles. Following them in was Kobi, Damien King and Graham Jans. 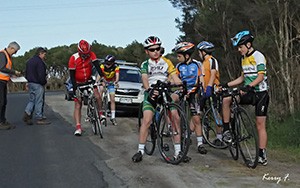 “The C Grade field, of mostly juniors raced a handicap, starting at the corner of the Koonwarra and Tarwin Lower roads.”

The C Grade field, of mostly juniors raced a handicap, starting at the corner of the Koonwarra and Tarwin Lower roads. Zach Stubbs-Taylor had a 10 minute start, followed Jack Allen and Sullivan Herbert on 7 minutes, Greg Bradshaw and Harry Herbert at 4 minutes, Kaleb Jans at 1 min and Thomas Fitzgerald on scratch. By the time the riders reached the T intersection with the Koonwarra-Inverloch Rd, Thomas had caught up with Kaleb. But the action was up front – Greg had dropped his co-marker Harry and was quickly closing the gap to Zach. Harry was riding with Jack and Sulli was expecting the back markers to catch him. The climb past the golf course saw Greg catch Zach just near the top of the climb and these two then swapped turns to the finish. The dash to the line saw Greg take the win from Zach. Meanwhile behind Jack Allen raced up the golf course hill better than Harry and this enabled him to take 3rd. The backmarkers were next home with Thomas Fitzgerald taking 4th and fastest ahead of Kaleb and Harry with Sulli bringing up the rear.

Next weekend our Club juniors will be in action on Saturday at Wonthaggi and Sunday morning at Outtrim as they tackle the Junior Experience weekend. The riders race 6 events over the 2 days and the club expects around 70 entries from around the state. The senior riders will be on deck to help run a safe event and encourage the juniors. Our start juniors have all started at this event and the Club now has a long history of riders progressing to State and National level. Our message to the locals is to take care around Outtrim and Kongwak next Sunday morning – there will be plenty of cycling action.