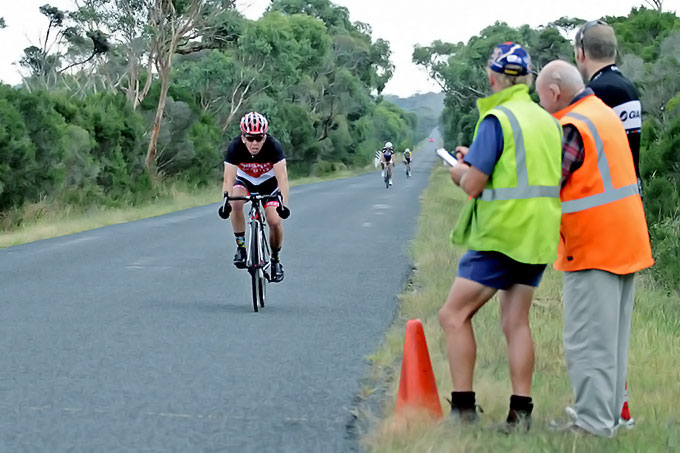 Brett claims the win from Clem and Thomas

Last Saturday 16 senior cyclists and 3 junior cyclists competed around the Pound Creek circuit for the opening event of this year’s Road Season. At least the really hot days appear to be behind us this summer BUT cyclists still had to cope with a strong westerly wind, up to 25degC and spasmodic rain.

Despite these difficult conditions the first 3 senior finishers cracked a very fast pace. Brett Franklin completed the 51km 2-lap race in the smart time of 79min 17seconds, also the fastest time. Second was Clem Fries and third the rising 14-year old star of Tom McFarlane. Only 21 seconds separated these 3 at the finish. They had ridden together until Brett made a bold move 5km from the finish where the other 2 were not able to bridge the gap.

“senior riders were sent off in 4 groups”

The 16 senior riders were sent off in 4 groups. On 12 minutes limit were Will Lumby, Geoff Fraser and Matt Minogue. At 7 minutes were Neil White, Ron Cheyne, Mark Benseley, David Bennett and David Lumby. At 3 minutes were Tony Clark, Dave McFarlane, Jason Scott and Chris Rowe. The Scratch bunch was those that finished in the first 3 plus Phil Hanley.

It was a cracking pace from the start and many selections had already been made before the first lap was complete. As usual the Golf Course hill played its part.

“a fast group of seven riders”

Four riders abandoned after the first lap then it was a fast group of seven riders that roared around the course. With 5km to go there were 2 groups of 3 each only a few 100s of metres apart before Brett made his move.

“Fourth to finish was Chris Rowe”

Three Juniors rode an out and back course up the Pound Creek Road. Aaron Fraser was off scratch then finished 3rd but with with the fastest time of 17.48. Aaron gave away 2min30 to Alex Bennett who thanked him by finishing 1st in 18.53! Aaron gave 3 min to Matt Winchester who finished 2nd in 19.38.