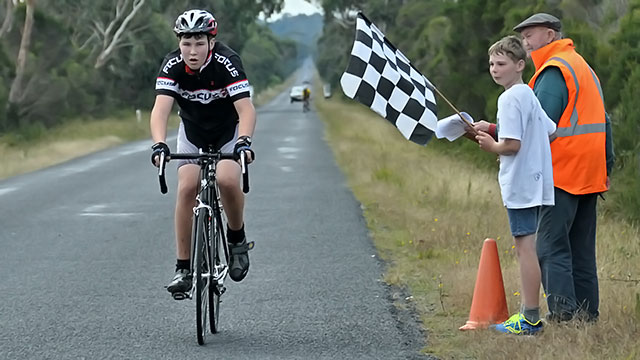 Racing was back at Pound Creek on Saturday and riders were able to enjoy a mild to warm day with light winds.  With a busy weekend for riders – some racing at Ararat and some at Warrnambool whilst others are bike touring in Europe, the numbers were down a little in the senior field.  Just 14 starters troubled the handicapper.  The duo on scratch – Stefan Kirsch and Clem Fries, were giving starts to a trio on 3 minutes, a duo on 7 minutes whilst there was a group of 5 at 11 minutes and a further duo on limit of 18 minutes.  This was a little different to the earlier weeks where there have been good numbers of back markers so the task was ahead of the back markers this week.  The race involved 2 circuits and a total of 48km.

After the first 6km and the climb past the herb farm it was Geoff Fraser dropping his co-marker, Dane Herbert and riding well.

Brad, Steve, Grace, Morgan and Bernadette are working well on the first lap.

After the first lap the group on 11 minutes were still all together – Morgan Barnes, Brad Bouquet, Steve Wilson, Bernadette Fitzgerald and Grace McLean – and working well. Steve Allen was having his first race of the season and found the pace too hot after the first lap.  With scratch catching the 3 minute bunch it all came undone for the backmarkers with Stefan only managing to get Harrison McLean (3 min) able to go with him over the last lap.  Out front the limit riders were caught by the 11 minute bunch on the second time up the hills to Koonwarra and they took control of the race.  Only Lachlan Matthews (7min) bridged the gap.  In the dash to the line it was Morgan Barnes winning in 1.30.57 from Lachlan and Steve Wilson.  Next home was an improving Bernadette just ahead of Grace and Brad. Harrison McLean was next in at 7th with company from Stefan, finishing 8th and Fastest – 1.20.16. Phil Hanley sprinted home in 9th and rounding out the top ten was Chris Rowe.

The juniors raced from the Herb farm back round to the finish line over 19 km.  With 7 starters the scratch duo of Matthew Winchester and Oliver McLean were giving 1.30min to Tom Fitzgerald and Mitch Harry, 4 min to Kaleb Jans whilst out front it was Felicity Waddell and Michael Eastwood on 10min.  The limit riders worked well until the Golf course hill where Michael quickly opened up a gap.  At the back of the field, Mitch Harry was having a bad day whilst Matthew Winchester was driving the scratch duo hard.  The run down Pound Creek Rd saw Michael hold his lead to have a clear win (45.01min).  Felicity worked hard to claim 2nd whilst the fast finishing scratch riders went through the rest of the field.  Matthew took out third and fastest time – 37.00 min just ahead of Oliver. Thomas Fitzgerald sprinted in for 5th just ahead of Kaleb Jans whilst Mitch was 7th.

Next weekend the club gets to ride with the Caulfield-Carnegie club at the Phillip Island racetrack and to join with big numbers of riders in graded scratch races. 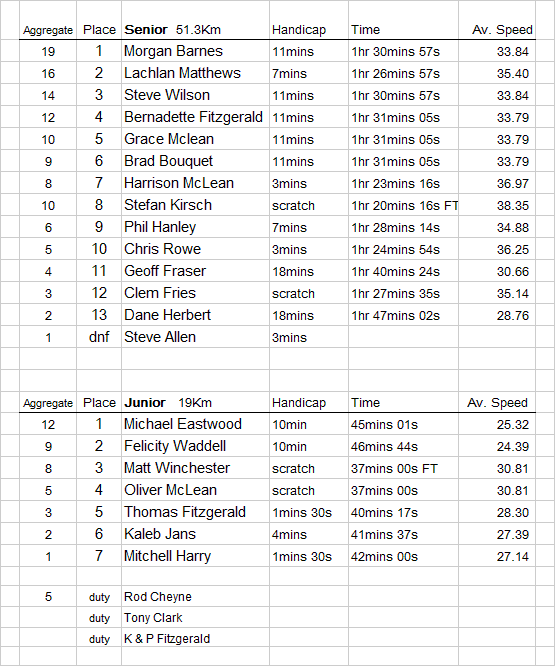