The four and half minute bunch on the Golf Club hill for the first time. (28 event images)

Racing on Saturday was held at Pound Creek in fine conditions, but with a cold, strong, west-north-westerly wind blowing making it difficult for those participating. Several riders from Warragul joined Club members to make up a field of 28 senior riders contesting the Lex Watt memorial trophy, a handicap event. The juniors this week were down to just four riders to contest the Watchorn trophy.

The senior riders were handicapped into six groups racing over two laps (51km’s) of the Pound Creek circuit. There were two riding from limit on 16mins, five in the 12minute bunch, ten riding from eight minutes, six in the four and half minute bunch, on second scratch at one and half minutes was a strong bunch of four comprising Stefan Kirsch, Brett Franklin, Thomas McFarlane and Will Lumby. On scratch was just elite rider Cyrus Monk (Warragul).

On the first lap past the Leongatha Golf Club the rider groups were on the whole still intact with only a few riders losing contact. Will Lumby had lost his contact with the second scratch bunch and was picked-up and keeping pace with Cyrus as they passed the Golf club. After losing time on the field, Cyrus pulled out after first lap finding his handicap too much in the strong winds, while Will continued. Riders had to contend with Seismic survey work that was being conducted in the area, causing some disruption to the racing. A shake-up of the field on the second lap resulted in a strong bunch of eight riders, formed mainly from the four and half bunch leading the race before the critical run up the hill into the strong wind past the Golf Club. Over top, only five of the eight remained, but still not caught by the second scratch trio of Thomas McFarlane, Stefan Kirsch and Brett Franklin.

Juniors raced a handicap event over an out-back-twice course of 18Km’s to decide the winner.

The School holidays had an effect with the junior numbers with only four to contest the Watchorn trophy. They raced a handicap event over an out-back-twice course of 18Km’s to decide the winner. First away on a handicap of eight minutes was Felicity Waddell, followed by Kaleb Jans on two and half minutes, at one and half was Thomas Fitzgerald, and Oliver McLean on scratch. The trophy was won by Oliver closely followed by Thomas second, Felicity third and Kaleb fourth.

Next week the racing is at Kernot. 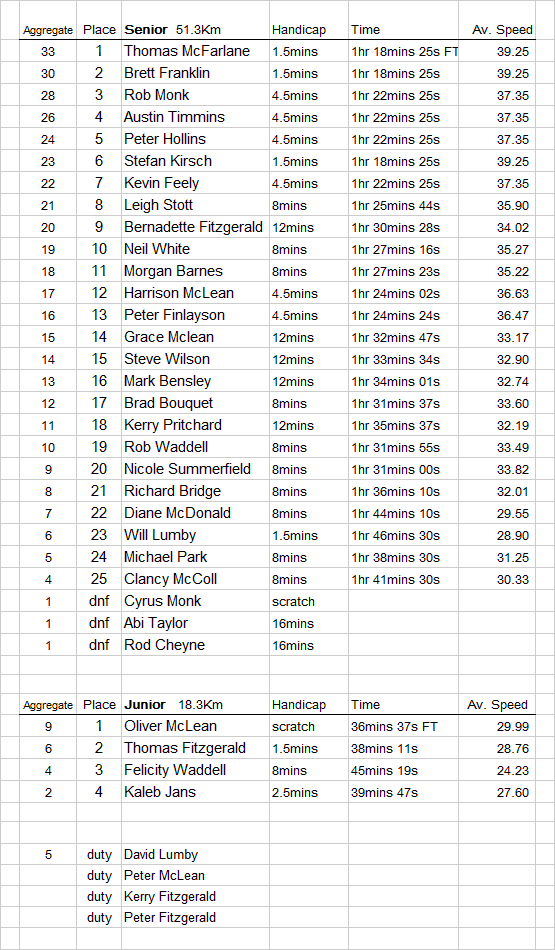