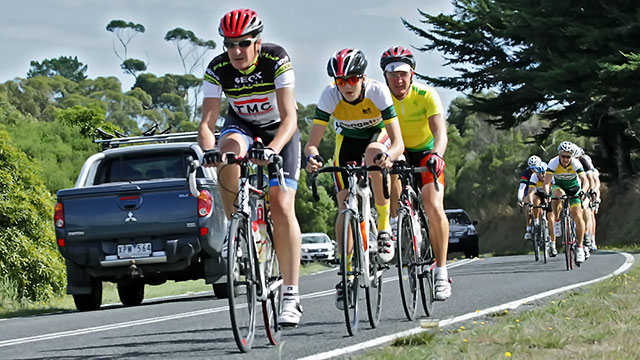 The 2014 road season commenced with racing at Pound Creek on Saturday with beautiful autumn weather making it easy to put some distance under the bike.  The day saw seven riders front up for their first race on the road with the club.  It was also pleasing to see Rod Cheyne back racing after his altercation with an on road stick last season.  The senior riders were split into 3 groups for graded scratch races of 2 laps of the Pound creek circuit.  This will give the handicapper an idea of how to grade the riders over coming weeks.

In A grade there were 5 riders.  The group stayed together on the first lap but the second lap over the hills, especially the golf course hill at Leongatha South saw Ronald Purtle and Thomas McFarlane open a break on Lachlan Matthews and Tony Clark with Chris Rowe a bit further adrift.  In the dash to the line it was a win to Thomas from Ronald. Lachlan Matthews outsprinted Tony for third.

The handicapper placed 11 riders into B grade with a couple of juniors on their first outing perhaps being put under pressure. Will Lumby, David Supple and Rod Cheyne attacked on the second lap and created the break over the hills and had a clear gap for the run down Pound Creek Rd.  In the end the young legs of Will Lumby were too good for the more senior riders with David taking second and Rod third.  Mark Bensley found himself stuck between the break and the bunch but rode strongly over the last 6km to take 4th. David Lumby won the bunch sprint for 5th ahead of Neil White, Steve Wilson and Gary Campbell.  Then it was Austin Timmins, Kerry Pritchard and Harrison McLean.  Club President Ronald Purtle had a few words of encouragement and energy bars for Harrison at the race end.

In C grade the 3 starters split on the ride over the first lap so all ended up riding the second lap alone.  Damien King rode well for 1st place ahead of Michael Parks and Geoff Fraser.  Michael was heard afterwards saying he must do more training.

The junior field had 4 new road riders out of 5 starters so the handicapper gave them a 10km time trial up and back on the Pound Creek Rd.  The best time was put in by Aaron Fraser with a 17.01minutes. Just behind was Grace McLean at 17.10, followed by Bernadette Fitzgerald at 17.31.  Then it was the younger riders of Thomas Fitzgerald in 18.45 and Oliver Mclean in 19.40sec.

The racing next weekend will be some handicap racing so riders will be able to ride with others of similar ability and that should assist in taking on the course.  For the limit riders they get the chance perhaps to tack onto a faster group toward the end of the race and enjoy a bunch ride to the finish.