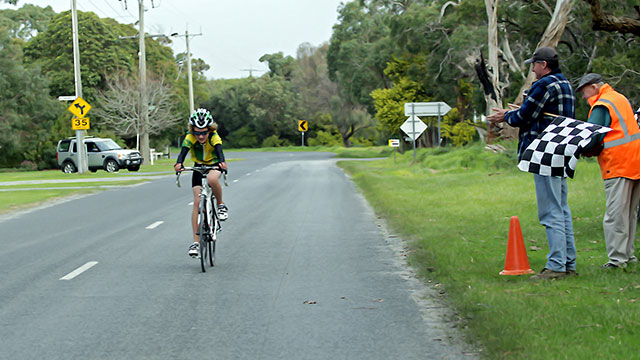 Aaron is a clear winner of the Junior 20Km handicap.

Racing was once again run from Tarwin Lower out to the intersection at Walkerville North and return. Riders had a gusty tail to side wind on the run out but heavier conditions for the run home. The cross winds across the hilltop saddle near the Walkerville South intersection were very gusty and bikes at a 45 degree lean. The latter part of the race saw some light showers skip across just to remind the riders that it was a winter day.

The 2 min group of  Clem  and Ronald.

The field of 14 seniors had Brett Franklin on scratch chasing 2 minutes to Clem Fries and Ronald Purtle. Brett and Ronald were back from their racing at the major open – The Lakes Gippsland Tour so the other riders were going to have a job keeping them at bay. The windy conditions also favoured them. Limit was at 18 minutes with Geof Fraser and Lindsay Love leading away. They were followed by Steve Wilson at 11 minutes. Last time the race was at Tarwin Lower Steve had an extra 2 riders with him and his bunch were able to stay away for the win. This week he was chased by a trio at 8 minutes, a further quintet at 5 minute and the back trio.

This ride was further than the previous ride as it ventured down the steep hill to the Walkerville settlement. At the turn point the limit riders were still in front but Steve Wilson had them well in site. The 8 min trio of Brad Bouquet, Kerry Pritchard and Rod Cheyne had also closed in. Moving along well was Kevin Feely who had dropped his bunch on the climb up to the Walkerville South corner. However what was more ominous was the back trio were probably just 6 minutes behind limit.

Steve Wilson managed to hit the front by around 8km to run but was about to be chased down by Brad, Kerry, Rod and Kevin Feely. However, at this point they barely had a minute lead over the balance of the field as the back trio were driving hard. This extra pace saw all the field rounded up with 4km to the finish. In the dash to the line it was Brett Franklin taking the win and fastest time (1hr3min) from Ronald Purtle. Kevin Feely finished well for 3rd ahead of Chris Rowe, Clem Fries, Kerry Pritchard, Rod Cheyne, Brad Bouquet, Steve Wilson and rounding out the top ten was Phil Hanley.

“Matt Minogue was able to get home for second whilst Austin finished third and fastest (35.59 min)”

In the Junior race, run over 16km Matt Winchester was on limit of 10 minutes. He was followed by Aaron Fraser 5.00min, Matt Minogue 1.00min and Austin Timmins on Scracth. As with the seniors the juniors had to contend with the windy conditions. Aaron Fraser has run into a purple patch and followed up his win of last week with another win this week. He rounded up Matt and was then strong enough to hold off the chasing duo. Matt Minogue was able to get home for second whilst Austin finished third and fastest (35.59 min)