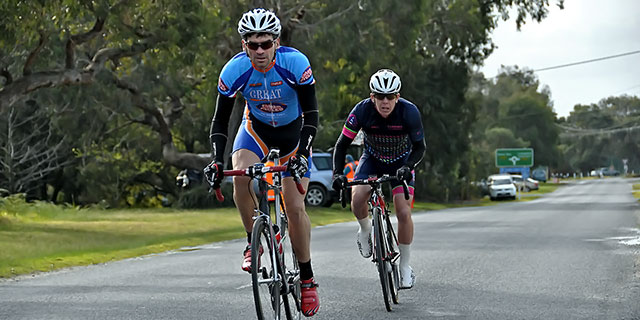 A rainy and cold Saturday morning along with State Road Titles at Wangaratta over the weekend impacted on race numbers on Saturday afternoon.  The racing was at Tarwin Lower with riders racing to Walkerville and return.  The conditions were still cool and breezy for Saturday afternoon however this did not impact on the race times and the scratch riders were around 2min quicker than for the race early in the season.

The scratch duo of Brett Franklin and Stefan Kirsch had a lone rider – Peter Hollins, on 2 min, a duo on 5 min, a trio on 9 min plus a further 4 on 12 min and a lone limit rider – Dane Herbert on 16 min.  Dane was all sorted to put in a good effort as he was on a new race bike.  However, new tires tend to be on the soft side so his race came to an abrupt end after only several kilometres.  The scratch duo had caught Peter by the turn and shortly after they rounded up Kevin Feely and Neil White.  By the time they had descended the large climb and were back at the “10 mile’ intersection they had caught the 9 min trio.

Meanwhile out front, Mark Bensley, Kerry Pritchard, Steve Wilson and Bernadette Fitzgerald were keeping their bunch together and swapping turns.  With 5 km to go they were still in front, however at 3km to go the scratch duo swept past – they thought they were still chasing Dane out on limit.  The finish straight saw Brett take an easy sprint win for first and fastest – 1hr 3min and 49 seconds. Stefan claimed second.  Bernadette lead the limit bunch home to claim 3rd with Kerry 4th and Mark 5th. Again riding alone – Peter Hollins was 6th.  The 9 min trio were next in with Morgan sprinting home for 7th, Brad Bouquet 8th, Leigh Stott 9th and Steve Wilson rounding out the top 10.

In the junior race over 19km, there were only 4 starters and they too were quicker this weekend than the May date.  With only 4 starters, the winner from last time on this course was Felicity Waddell riding on 8 min.  She was followed by Kaleb Jans, 4 min, Thomas Fitzgerald 1 min and Oliver McLean on scratch.  By the turn Oliver had caught Thomas and they had Kaleb in site. Felicity was putting in another good ride and it looked like being a close result.  At the finish it was Felicity taking the win with another great ride and finishing around 200m ahead of the fast finishing trio.  Oliver took 2nd and fastest time – 36.04 min, just ahead of Thomas and Kaleb.

Next week the racing is at Woolamai and includes the ride up the Glenforbes gorge road before climbing back over Trews Rd to finish at the Woolamai race track.  Riders will be hoping for better weather than last year when the race was cancelled due to the bad conditions.

At Wangaratta our riders raced the time trials on Saturday and the road race on Sunday.  Saturday saw the riders finish midfield.  The Sunday road race saw Will Lumby finish 4th in the Men 17 division whilst Austin and Harrison were again out of luck. 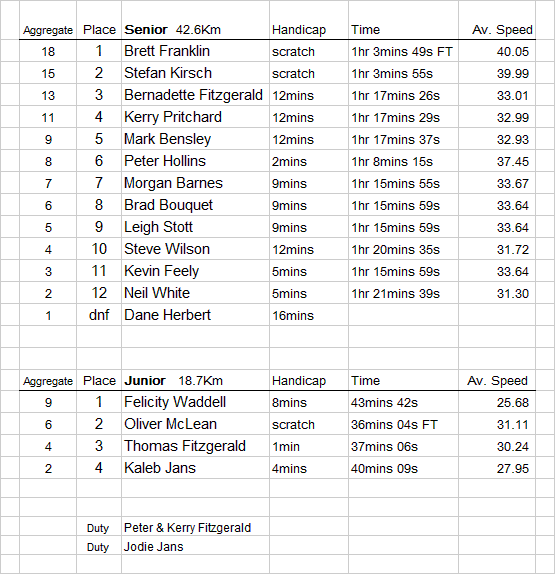