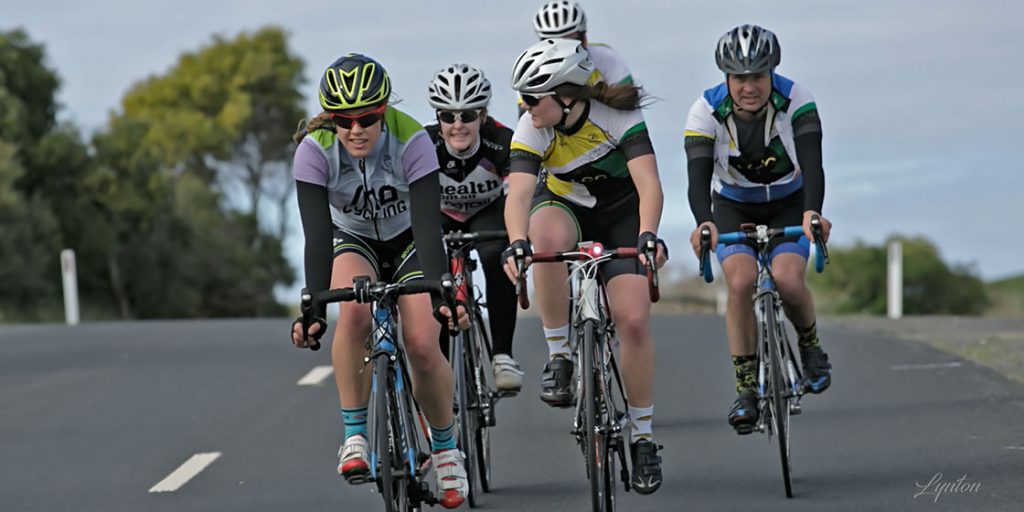 The road season ended with a good field racing from Tarwin Lower to Walkerville and return. The B grade field raced in with the A grade field with the scratch quartet giving out a 20 minute start to the 2 limit riders. Whilst the day was fine the riders had to battle a cold and gusty westerly wind. This was largely a tailwind for the outward journey and the 2km climb up to the Cape Liptrap turn it meant riders suffered on the return run.

By the time the riders reached the turn, it was riders from the 15min bunch just in front, with the girls from the 8min bunch right behind. However, the big movers were several from the 8minute bunch – Damien King, Brad Bouquet and Thomas Fitzgerald as they turned within a minute of the leaders. They were being well hunted by riders out of the 5 minute bunch – Anthony Mitchell, Leigh Stott and Austin Timmins. Meanwhile the scratch bunch had lost Harry McLean with mechanical trouble and consequently they had not closed the gap to the 5 minute bunch by any great margin.

The run back starts off with a steep pinch up to the Cape Liptrap turn and a fair blast of wind over the ridge before a long grind into the wind back to Tarwin Lower. By the time the field hit the ridge it was Damien King pushing the pace with his 8minute co-markers who had hit the front. Kaleb Jans from the 15 min bunch and Bernadette Fitzgerald managed to hitch a tow on this fast moving bunch. The bunch kept working hard and dropped several on the run back in including Mark Bensley and Bernadette Fitzgerald. The road has some long straights and if chasing bunches can get to around 1 minute back you can grab a sighter on the bunch ahead. However, with a large bunch together out front and scratch not being able to hitch up with the 5 minute bunch it was still a gap of 2min to the chasers at the finish.

The dash to the line saw Damien King take a win ahead of Brad Bouquet and Thomas Fitzgerald. Kaleb Jans was right there at the finish in a good performance by him for 4th. Next home was Leigh Stott just outsprinting Anthony Mitchell, Bernadette Fitzgerald , Austin Timmins and Mark Bensley in 9th. Will Lumby lead the scratch bunch in to claim 10th and Fastest Time of 1 hr 7min12 sec.

The club adjourned to the Riverview Hotel for presentations and a quiet chat. Brett Franklin won the season aggregate award for best and most consistent rider over the season from a very close challenge from Harrison McLean. The B grade aggregate went to Kaleb Jans who has shown some great development over the season.

The riders have some Gippsland combines over the coming weeks prior to the track season getting underway in October. Any riders keen to have a try on the track should contact the club. The club has track bikes available for riders wishing to experience the buzz of close racing at the velodrome.