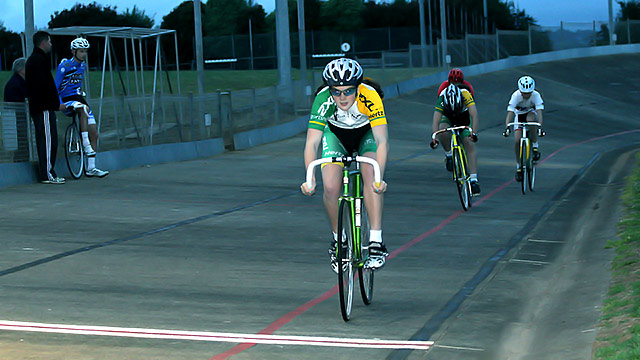 Friday night racing suffered the normal Christmas decline in numbers as various members attended work functions. Just prior to start time a heavy cloud and light missed passed overhead and members were busy scanning radar screens to check on the extent of the moisture. Fortunately it cleared in time and the riders in attendance put on some great riding.

The first event of the night was a 1 lap time trial. Bernadette Fitzgerald and Alex Bennett both recorded season personal bests. In the Junior B section Oliver McLean was quickest at 45.03 followed by Thomas Fitzgerald 47.65 and Cody Cox at 52.19sec. For the girls it was Grace McLean at 39.43 followed closely by Bernadette at 39.62, then Fleur Timmins 44.57 and Kelly Hamilton 45.73. For the Junior A riders it was Matt Minogue at 34.56 just staying ahead of Austin Timmins 35.12. Alex Bennett stopped the clock at 40.36 whilst Matt Winchester was at 41.42sec. Thomas McFarlane put in a slick 30.40sec .

“In the girls race over 4 laps it was Grace winning from Bernadette and Fleur.”

The scratch races flowed. Junior B at 2 laps was Oliver winning from Thomas and Cody. In the girls race over 4 laps it was Grace winning from Bernadette and Fleur. For the junior A boys Austin Timmins won from Matt Minogue and Alex Bennett.

The handicaps were the next events. The first Junior B race went to Oliver (scr) from Thomas (25) and Cody (45) a close third. A minor shuffle by the handicapper saw Oliver again snatch the win right on the line from Thomas (35) and Cody (60). The girls handicap saw Bernadette (20) hold out Grace (scr) and Fleur (40). In the re-handicap it was Kelly Hamilton (60) taking the honours from Fluer(50) and Grace (scr). In the Junior A boys, Thomas McFarlane started at minus 45m and with a wall of riders over the track at the finish had to settle for 4th behind Alex Bennett (70), Natt Winchester (60) and Austin (15). Second time around it was Matt Minougue (15) from Austin (5) and Alex (55) in third and close to making it a double.

The junior B sprint was another win for Oliver McLean. In the girls Olympic sprint a close race saw the win to Bernadette and Fleur over Grace and Kelly. For the junior A boys it was a win to Matt M and Matt W over Alex and Austin. The club coach has Thomas Mcfarlane working hard over the night as he was doing 8 lap (3.2km) efforts behind the motor bike over the night. This was great for the spectators as Thomas was able to hit speeds of up to 65kph.

“The junior B scratch race over 2 laps went to Oliver from Thomas and Cody.”

The junior B scratch race over 2 laps went to Oliver from Thomas and Cody. However, the generous start for Cody almost ad him home for the win. If the barracking was enough he should have made it. The girls scratch race saw a determined effort once again from Grace to claim the win ahead of Bernadette and Fleur. With the motor bike in action the Junior A riders were given an 8 lap race behind the motor bike. Austin Timmins proved the master of the scratch races once again winning fromMatt Minogue and Alex Bennett. This race encouraged Bernadette and Grace to try behind the motor bike. Grace took a liking to this facet of the bikes and was able to put some distance into a tiring Bernadette at the finish.

“…encouraged Bernadette and Grace to try behind the motor bike.”

The Fitzgeralds took out the raffle and coach Tony Smith reneged on sharing the fruit cake he won last week. To save the worry next week will finish with a sausage sizzle and Christmas cheer. This will be the last Friday night for 2013. Training will resume on Wed Jan 8 whilst racing will resume on Fri Jan 17 2014. With another girl due to start in the New Year this will bring the girls to 6 riders and well and truly the capacity to race separately to the boys. If any novice takes a shine to riding over Xmas the Club will be happy to see them come and try in the New Year. The numbers riding has been up and it has made each night a lot of fun.