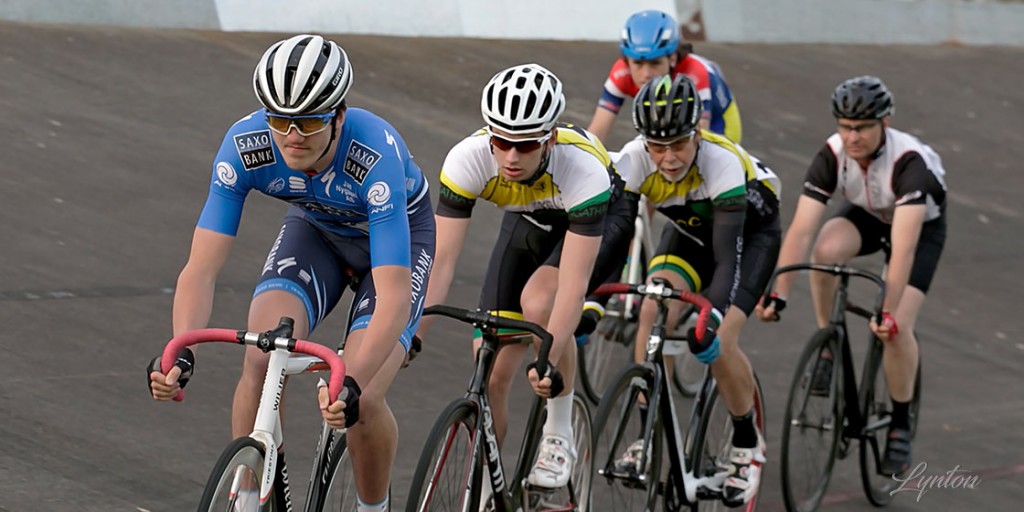 The second night of track season saw a good roll up of riders – especially seniors.  This enabled the riders to be split into different fields over the night.  The night started off with a cold wind blowing but by around 7.30pm that had dropped so conditions were pretty good for racing.  The first event was the 1 lap dash against the clock and some slick times were posted.  Thomas McFarlane 30.77 sec just edged out Will Lumby on 30.91 sec.  Next best was a very surprised Dane Herbert with a time of 34.62 sec.  In the Junior section Thomas Bouquet racing for the first time on the track posted a great time of 35.36 whilst Thomas Fitzgerald was on 36.23 sec  and Felicity Waddell on 40.00 sec.  The 1 lap time trial helps the handicapper sort out handicaps for the later races.

Dane on his way to win the 4lap B grade scratch race.

Next up was a 3 lap scratch race for the C grade riders and Felicity took the honours ahead of Caleb Murphy and Nick Hogg.  This was followed by a 4 lap B grade scratch race.  The on fire Dane Herbert had an easy win from Thomas Fitzgerald, Thomas Bouquet and Michael Blogg.  After this it was on to the 8 lap A grade scratch race.  The riders kept a steady pace on and the five riders were all in tact for the sprint.  Thomas McFarlane won from Will Lumby and Oliver McLean.

The first 1 lap junior handicap saw the scratch riders fly past the other riders right on the line with Thomas Fitzgerald getting the win by 2 cm over Thomas Bouquet and Felicity (40m) in 3rd.  The handicapper looked at his marks and sent them out for another dash and this time Caleb Murphy (95) grabbed the win ahead of Nick Blogg (110) and Felicity (45) just held on for 3rd.

The seniors had a 1 lap dash and the scratch duo of Thomas McFarlane and Will Lumby swept around the field as the came into the straight with Will taking the win ahead of Thomas whilst Dane Herbert (50) finished well for 3rd place.  In their re-handicap over 2 laps the scratch duo lost out at the start as Thomas had a mechanical issue.  However, Will Lumby riding from 10m came home to claim a double win ahead of Oliver McLean (55) and Kevin Feely (85).

The riders were given a round of sprint derbies for the next racing.  First heat saw Felicity win from Caleb and Nick.  In the second heat it was a narrow win to Thomas Fitzgerald over Thomas Bouquet as a lack of fitness was eating into Thom Bouquets efforts.  The third heat saw Kevin Feely triumph over Rob Waddell and Dane Herbert.  The last heat saw Thomas McFarlane again moving smoothly take the win from Will and Oliver.

The last races for the night saw riders race an elimination.  In the B grade event, Thomas Fitzgerald had too much for Thom Bouquet at the last sprint whilst Felicity chipped in for another 3rd place.  In the A grade event there were some good battles to avoid elimination but the end result was another win to Thomas McFarlane from Will and Oliver.

An early night was called as riders had an early Saturday start at Inverloch for the Bass Coast Challenge cycling event.  Club members are advised that the need to be early to training on Wednesday night as the Club Annual General Meeting is on at 8.00pm at the Car Club rooms.  Come along and have your input into the Club and make it work for you.