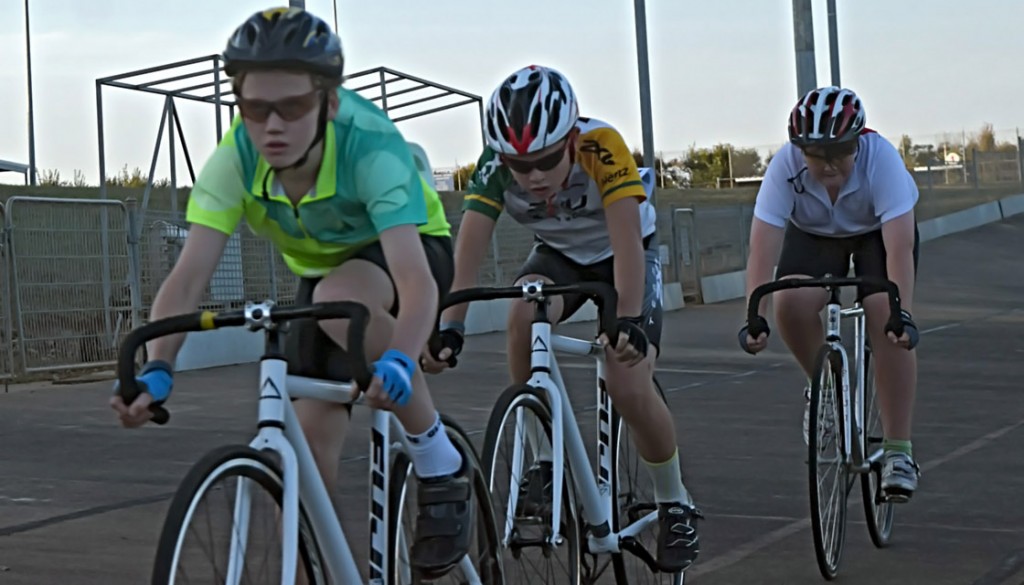 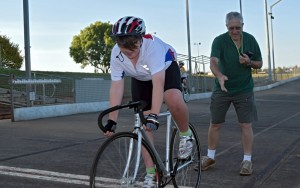 It was another quiet night of racing however those that were present had great conditions for racing.  In the 1 lap time trial there was only one rider to post a new personal best and that was Oliver McLean who put in a really hard training session on Wednesday night and was still a little tired on Friday.  In the seniors Austin Timmins was quickest at 31.12sec which was a great effort as he had school swimming on earlier in the day.  Next was Dylan Adams at 33.56 sec followed by Dane Herbert at 34.98 who was battling a groin injury.  In the juniors it was Oliver Mclean 35.38 sec followed by Josh Wight 40.2 and Kaleb Jans 40.53 sec. Nick Blogg in his first race night clocked 48.40 sec. Dad Michael put in a 39.48 sec effort.

The scratch races followed.  In the senior 8 lap event it was steady pacing early on and in the bunch finish it was Austin winning from Kevin Feely and Dylan Adams.  Oliver McLean was racing in the senior field and was a close 4th.  In the junior 4 lap race it was Josh Wight who lead out after the bell but he was unable to hold out against Kaleb. Nick Blogg took third. 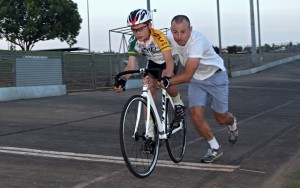 Kaleb on scratch in the junior handicap.

The juniors had some 1 lap handicaps.  In the first in a very close finish, Josh Wight (20) won from Kaleb (Scr) and Nick (80).  In the re- handicap it was Nick (110) getting the win from Kaleb (scr) and Josh (10).  As we did not have enough for holders for the seniors they were given a novelty teams scratch race.  The team of Dylan, Kevin and Dane took out the race from Austin, Oliver and Michael who could not get their tactics right.

The seniors followed up with an elimination race and the surprise first rider out was Dylan.  In a closely contested race it was Austin winning from Oliver and Kevin.

The last races for the evening were some sprint heats.  In the juniors it was Kaleb winning from Josh and Nick who was starting to get the feel of racing by the end of the night.  In the seniors Austin took no chances against Dylan as he answered the challenges in the last 200metres.  In the other heat, Kevin Feely made a move before the bell and opened up a winning lead over Oliver and Michael.

The Club has a monthly meeting on Tuesday night at the RSL rooms and the issue of a change of name for the club will be up for discussion.  If there is enough support there is likely to be a Special General Meeting called for March.  Please get your thoughts into the club.