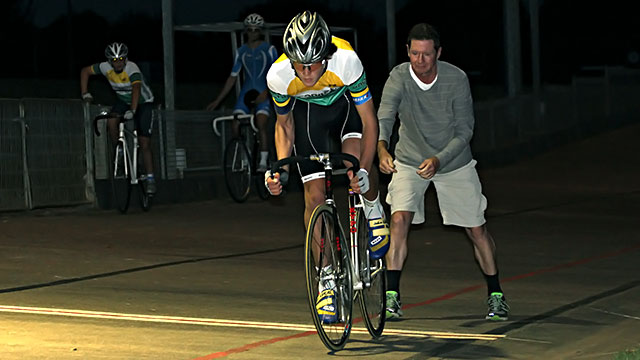 Track racing concluded for the summer season on Friday night.  The Club ran a shortened race program in perfect conditions followed by Championship medallions and a sausage sizzle to end the season.  The perfect conditions saw almost all the riders post a person best for the 1 lap time trial event.

“Bernadette Fitzgerald has continued to shave time off her personal best…”

This event has been run all season and some riders have made spectacular gains over the November to March season.  Thomas Fitzgerald has gone from riding around 50 sec down to a 42 sec lap on Friday night.  Some of this improvement is due to a better bike but a lot is back to the rider.  Thomas has been at most training sessions and has been an eager participant.  It would not surprise to see him emulate the efforts of Thomas McFarlane in the years ahead.  Thomas McFarlane also grabbed a new personal best with a time of 29.5 sec and also has made big steps this season.  In the girls Bernadette Fitzgerald has continued to shave time off her personal best and is nearing a level which will have her competitive at a State level.  In the Junior 15 men, Austin Timmins rode a new pb of 33.29 secs so has managed to pull around 3 secs over the season.  This has also brought him into contention at a State level. Another rider who has been training well over the past 6 weeks has been Harrison McLean and he has also managed to pull around 3 sec as he clocked 34.31 sec on Friday night.

“In the Junior B section it was a great battle but Oliver McLean proved too good for Thomas Fitzgerald, Fleur Timmins and Jack Allen.”

The second event for the nights was a scratch race.  In the Junior B section it was a great battle but Oliver McLean proved too good for Thomas Fitzgerald, Fleur Timmins and Jack Allen.  With reduced seniors Thomas McFarlane raced with Junior A and duly controlled the business end of the race winning from Austin and Harrison McLean.

In the Junior B handicap it was a close race with Thomas winning from Oliver, Fleur and Jack.  In the Junior A, Bernadette blasted away at the start and quickly passed the outmarkers and finishing a clear winner.  Thomas McFarlane started at 50m behind scratch in the 1 lap dash he was always struggling to get near however a withering rush up the finish straight saw him grab third just behind Austin Timmins.

The final event for Junior B was another 3 lap scratch race and once again it was a battle down to the line.  Oliver chalked up another win from Thomas and Fleur.  In junior A it was an elimination and Thomas McFarlane was always in control however Austin pushed all the way and made him earn the win.  Harrison rode well but had to settle for third.

Chief man on the bbq was Ben Meadley as he was saving for a State masters team ride on Saturday.  His team came home in second place in the team pursuit after the NSW team. Well done Ben.

Riders are now in training for the road season – starting on April 5 at Pound Creek – assembly and entry at 1.00pm. This is a good day for any rider interested in trying the road season to come along.  For junior riders it gives a few week of racing before the big junior weekend at the end of April.  On Sunday April 6th, from 10.00am at the Koonwarra Reserve there is the Sauvy Ride and Cancer fund raising day.  Anyone interested in a social ride should come along.  Do the 34km ride to Pound Creek and back or ride or walk the rail trail.  A byo bbq will follow.  The Club has a meeting on Tuesday night at the McFarlane house.

A print version of any image over the season is available to Members  upon request. – with my compliments – Lynton