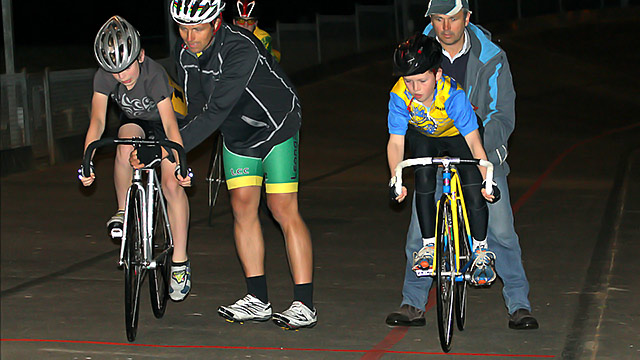 Once again Friday night racing was held under threatening skies however, after the wet week which washed out Wednesday night training the racing program on Friday night went through without hitch.  Several riders were missing as they were saving energy for the Bass Coast challenge ride on Saturday morning.  Those that raced produced some thrilling finishes.

The 1 lap time trial produced some interesting times with several producing some PB’s.  However, some of the riders had done swimming training before racing so were a bit lethargic for the bike legs.  In the Junior B section, the times are all very close – Fleur Timmins clocked 45.60sec, followed by Jack Allen 46.14, Oliver McLean 46.7 and a great ride by Thomas Fitzgerald at 47.8 sec.  In the junior A group Austin Timmins was best at 35.94, followed by Aaron Fraser36.7, Harrison McLean 40.02, Alex Bennett 41.11, Grace McLean 41.86 and Matt Winchester 42.8sec.  The senior group had Steve Allen at 32.4 sec just ahead of Josh Chiavaroli 32.6.  They were followed by Chris Rowe 34.5, Geoff Fraser 34.68, Will Lumby 35.15 and Kevin Feely 35.35sec.

“The senior 6 lap race went to Steve Allen from Kevin and Josh.”

The scratch rounds saw the junior B 3 lap race go to Oliver McLean from Fleur and Thomas Fitzgerald.  In the Junior A 4 lap event it was Austin from Harrison and Aaron whilst the senior 6 lap race went to Steve Allen from Kevin and Josh.

The handicap event was next on the program.  The Junior B group raced for the Jack Edney trophy.  Jack Allen was the very pleased winner of this event just getting past Thomas Fitzgerald and Oliver McLean.  In the junior A group Austin Timmins, the virtual backmarker on 25m was able to power home for the win by a half a wheel ahead of Matt Winchester and Alex Bennett.  The senior race saw Geoff Fraser dash away from his limit mark to score a convincing win from Will Lumby and Chris Rowe.

“In the Junior B in round 1 it was… Jack winning from Thomas.”

In the Junior A section Austin won his sprint ahead of Aaron and Grace whilst Alex Bennett gave up his lead position to Matt Winchester with the thought he could come from behind and win.  Matt quickly put paid to that idea with a tenacious ride for the win.  The senior sprint heats saw Steve Allen win from Kevin Feely whilst Josh Chiavaroli won from Chris Rowe and Will Lumby.  In the winners final it was a great race with Josh Chiavaroli grabbing the win by a tyre over Steve Allen.  Will Lumby and Austin Timmins had a sprint and this time Austin was caught napping by Will who duly raced home the winner.

The riders had another round of scratch races to complete the night.  Oliver McLean went on his winning ways winning from Fleur and Jack.  In the Junior A group, Austin Timmins made it 3 from 3 for the last scratch races winning from Aaron and Grace.  In the Senior race the spectators were again treated to a great finish.  This time it was Kevin Feely dashing home to grab the win on the line from Chris Rowe and Will Lumby.