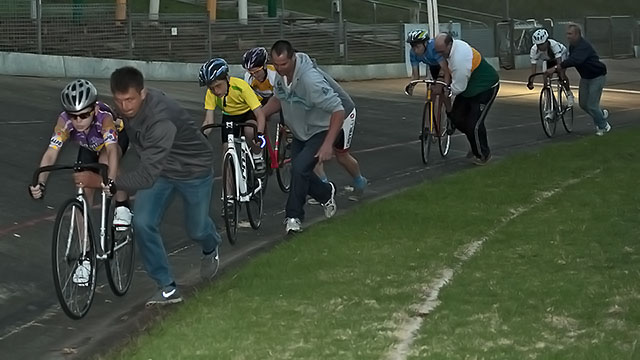 The summer track season resumed on Friday evening.  Conditions were mild with a gusty southerly blowing so it was not really conducive to great times. Officials had to put some seats up as young riders had grown over the 4 week break.  Some riders resumed with good form whilst others had lost pace and did not have their competitive drive again in action.  Racing saw 14 starters ready to go again.  In addition officials are working to get 3 new riders geared up to start over the next few weeks. Wednesday training night rain delayed those plans this week.

Austin Timmins was quickest at 31.45sec

The first event was the usual 1 lap time trial. 6 riders put in new personal bests – the McLean’s x 3 all hit new pb’s whilst Kaleb Jans, Fleur Timmins and Michael Eastwood also hit new marks.  In the senior field Austin Timmins was quickest at 31.45sec, followed by Will Lumby 32.30 and Harrison McLean at 32.90.  In the girls ranks it was Bernadette Fitzgerald 35.4sec from Grace McLean 36.00 and Katherine Fitzgerald at 37.39 sec.  In the junior ranks Oliver McLean, sporting new fluoro orange socks was flying with 38.36sec followed by Fleur Timmins at 40.54sec and Kaleb Jans at 41.47sec.

The scratch round saw Oliver McLean easily win the junior 4 lap race from Michael Eastwood and Fleur Timmins. The girls rode a 4 lap scratch race and in a really close finish Grace McLean came round the outside to grab the win from Bernadette and Katherine.  In the senior 8 lap race it was Austin Timmins winning from Will Lumby and Harrison McLean.

The handicap round saw some mixed racing.  In the junior 1 lap dash, Jack Allen (40) held on to win from Michael Eastwood (20) and Oliver McLean (scr).  In the second handicap it was Thomas Fitzgerald (20) winning from Oliver (scr) and Jack Allen (25) third.  The girls 1 lap handicap saw Bernadette Fitzgerald (scr) finish wide down the straight to grab the win just ahead of Grace (5) and Katherine (25).  In the senior 2 lap handicap, the backmarkers hit the front with around 180m to go with Austin Timmins (scr) putting in a big ride leaving Will Lumby (15) in second and Kevin Feely (80) in third.  The second handicap combined the girls with the guys but the handicapper could not stop the backmarkers – this time it was Will Lumby (15) getting a cart from Austin, winning easily from Bernadette (100) and Grace (115).

“The second handicap combined the girls with the guys but the handicapper could not stop the backmarkers.”

It was then time for some speed work via Olympic Sprints.  In the junior group the team of Thomas Fitzgerald, Kaleb Jans and Fleur Timmins had a small winning Margin over Oliver, Michael and Jack.  In the next group it was Grace and Oliver with a 1 sec win over Bernadette and Katherine. For the seniors it as Austin and Harrison having a clear win over Kevin and Will.

The next round of races was Elimination races.  In the junior race Fleur Timmins kept things under control to score a convincing win over Michael and Thomas. In the next group it was Grace McLean showing good form winning from Oliver McLean and Bernadette Fitzgerald. In the senior race Austin Timmins chalked up another win ahead of Will and Harrison.

Last races for the evening were another scratch round.  Oliver McLean was still energetic winning easily from Thomas and Kaleb.  In The senior race over 6 laps it was Austin, Will and Harrison taking the results.

Training will again be on Wednesday from 6.00pm. Club coach Tony Smith will hopefully have 3 new junior boys to introduce to track racing.  For any others interested this is still a great time to come down and take a look.  Members are reminded there is a club meeting on Tuesday night at Club presidents Lachy’s residence in Leongatha from 7.30pm.

Thomas McFarlane is busy training with the state team over the next couple of weeks prior to the National Titles at the end of January.  The rewards are high if he can keep the form he had from before the end of the year – inclusion in the Australian team to contest the junior worlds.