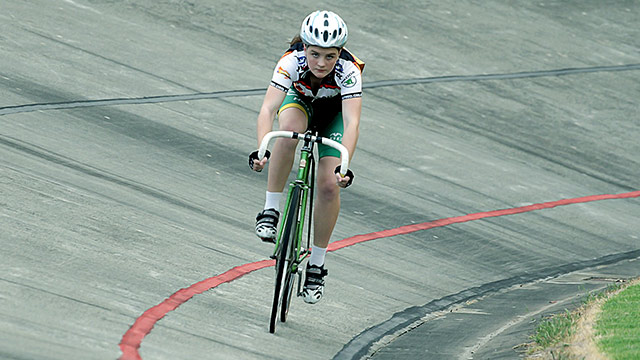 After the extreme heat and cancelled training on Wednesday night the 2014 track season resumed on a warm Friday evening. Fortunately a mild change had passed through leaving warm conditions and a fast track. Unfortunately with most riders still enjoying holidays there was only a small group of riders on deck.

In the 1 lap time trial marker for the handicapper, Ben Meadley showed the conditions were good with a personal best for the season of 31.17 sec. Oliver Maclean also chalked up a personal best at 43.28sec. With 2 Latrobe City riders in action there was at least enough for some racing on the night. One of these was former Leongatha rider Lex Townley who last raced for Leongatha in the 70’s when racing was on the old gravel track.

“In the Junior B 2 lap scratch race it was an easy win to Oliver Maclean over Thomas Fitzgerald.”

The juniors were combined for a 1 lap handicap. Thomas Fitzgerald (100) held on for a narrow win from Oliver (55) and Bernadette (30). In he re-handicap event it was still Thomas (90) who just managed to get to the line ahead of a fast finishing scratch rider, Harrison McLean and Oliver in 3rd.

The seniors were given a 2 lap handicap. This saw Lex (100) get the machine up to pace hold out Kevin Feely (70) and Wayne Tunks (120) with the backmarker failing to make contact. For the re-handicap the marks were much tighter and this time it was a win to Ben Meadley (scr) from Kevin (35) with Lex (45) again going well for 3rd.

With a strong wind arriving it was decided to push on with scratch races to finish the night. In the first, it was a close tussle but Oliver once again triumphed ahead of Thomas. It was a also another win for Harrison over Bernadette in their race. In the last race of the night it was Ben Meadley who powered home for the win ahead of Kevin , Lex and Wayne.

Training will be on again on Wednesday night with racing Friday night. Riders will need to get some track time up as mid February will see the club titles conducted. Thomas McFarlane is training hard with the state squad and is hoping to ride the National Titles in Adelaide in late February.