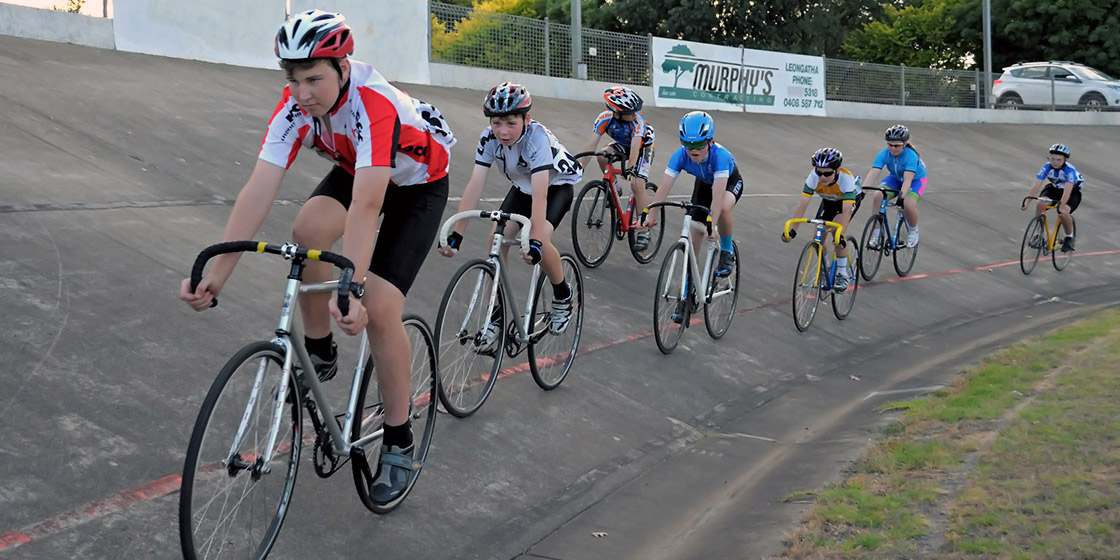 After a wash out last week the Club was very pleased to have a great night for racing the Xmas break up night on Friday.  As well as a short race program and sausage sizzle the club was able to present a life member medallion to past treasurer and secretary, Phil Ewington – congratulations Phil.
With a warm track and only a light breeze the riders found the track conditions very quick and almost all the riders managed a new season personal best for the 1 lap time trial.

The juniors riders were then put into 4 x 2 rider teams to contest all the other races with points given for each finishing place so even though the best rider may win a race they would have to try and help their team member to the best position as well.  This added a bit of extra interest into the racing.  In their 1 lap handicap, David Eastwood (55m) led all the way for a close win.  Next was Harry Herbert (45) and Sulli Herbert (50).  In their 4 lap scratch race it was a hard fought win for Oliver ahead of Thomas and Michael.  This was followed by an elimination and some of the teams performed better than others but with 4 riders left there was still one rider from each team.  Thomas Fitzgerald and Oliver were the last two standing and with a smart move Thomas grabbed a small lead and held on to take the win from Oliver and Michael.  Into the last race there was only a few points between the teams.  It was another 4 lap scratch race and Oliver won from Thomas and Michael. Overall, the points winners were Thomas and Harry, from Oliver and David, with Michael and Jack in third from Felicity and Sulli.

“…with a small rest done they were on the track for an elimination.”

The seniors had an 8 lap scratch to start with and this came down to a bunch sprint.  Austin Timmins took the win from Steve Allen and Kevin Feely.  With a small rest done they were on the track for an elimination.  Austin was again the winner but this time it was Dylan Adams taking the silver with Kevin Feely riding well for the bronze place.  The seniors then had a round of sprint heats before calling it an evening.  Heat 1 was a win to Austin from Steve and Dylan.  Heat 2 was a win to Dane from Kevin and Rob whilst Heat 3 saw Graham Jans win from Morgan Barnes and Michael Park.

Austin and Thomas McFarlane were racing at the Austral Wheelrace meet on Saturday night with further State titles over the weekend.  It was an important round of racing for Thomas as he hopes to make it through to the Nationals and then into an Australian team.  Some of his training of a Wednesday night behind the motor bike with coach Tony Smith has been sensational.

Track racing will resume on Friday Jan 15 at 7.00pm.  New riders are always welcome to come and try.