Friday night was a short night of racing as the Club held a sausage sizzle after riding to celebrate Xmas. With a cool and breezy night it was not conducive to great times. There were 19 starters which was good for this time of the year. Thomas McFarlane was in Melbourne National Omnium Titles over Thursday and Friday whilst Austin Timmins was also out as he had to be in Melbourne for a Sat 9.00am start. The Austral wheelrace and further titles were also listed for Saturday

Thomas McFarlane has put in a great 2 days over 6 events and just missed on a podium in the event . His results in the 6 events are as follows. Scratch race – 4th, Pursuit -12th, Elimination -3rd, Time Trial – 3rd, Flying lap – 5th, Points race – 4th. In the flying lap he was just 0.19 sec behind the winner. So a better pursuit and a touch better in the flying lap and he would have been right in contention. However, it was a great effort for the first year in this age division.

The first event on Friday night was the 1 lap time trial and the juniors keep improving. They need to get the start right, get up to speed and hold a good line to the finish. Josh Wight, Kaleb Jans, Oliver McLean, Thomas Fitzgerald, Michael Eastwood and Jack Allen all set new personal bests.

In the Junior B 4 lap scratch race, Oliver McLean once again controlled the race winning from Thomas Fitzgerald and Fleur Timmins. These three moved away at the front whilst others were watching the tail end of the field. In the Junior A grade 5 lap scratch race, Grace McLean made the move at the bell. She was rounded up down the back straight by Alex Bennett and Bernadette Fitzgerald and looked to be well done but challenged again into the finish straight. She managed to get past Alex but could not quite catch Bernadette. In the Senior 8 lap scratch race, the pace was consistent until the last lap dash. Steve Allen grabbed the win ahead of Dylan Adams and Harrison McLean.

The Junior B 1 lap handicap saw Kaleb Jans (15) flash home to take the win ahead of Michael Eastwood (25) and Fleur Timmins (10). In the re-run race it was Grace Allen (50) leading all the way who took the win. Josh Wight (45) chased hard but could not quite bridge the gap but held on for 2nd whilst Oliver McLean (Scr) came around the field to take 3rd.

In the Junior A grade 1 lap handicap race, Bernadette Fitzgerald (Scr) was causing the handicapper some problems as she quickly caught the others to win from Katherine Fitzgerald (30) and Grace McLean(10). In the second attempt to change the results the extra chased made no difference as it was Bernadette taking the second win with Grace McLean(15) 2nd and Alex Bennett (30) third.

The senior 1 lap handicap saw Dylan Adams (25) take the win from Rob Waddell (35) and Michael Park (15) in third place. The seniors managed to get a couple of sprint heats in before the sausages were cooked. In the first Steve Allen jumped the others at the bell and had an easy win over Dylan and Michael. In the second heat Harrison Mclean was too quick for Rob and Kevin Feely. 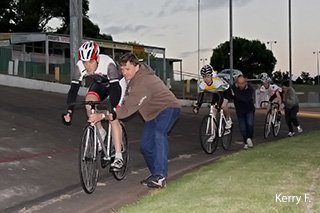 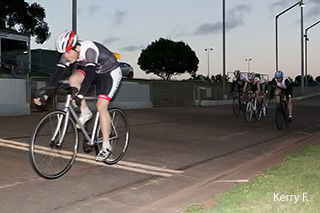