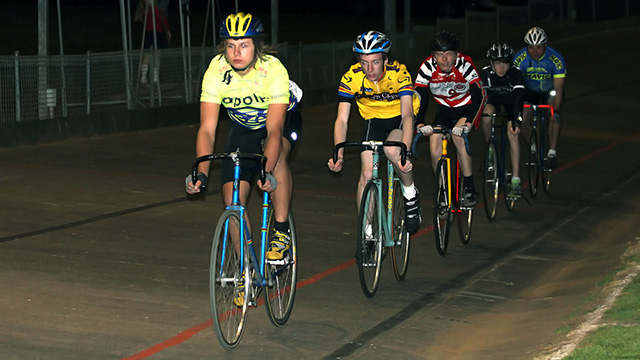 Leongatha Cycling Club track season fired up on Friday night in great conditions and with seven new riders along with returning club riders giving a turnout of 19 riders. This kept officials busy completing paperwork and arranging racing. The 2 hours of action between 8 and 10 was non stop racing.

The first event was a 1 lap time trial to see where every rider is at with their fitness and for our regular members they can look back at last years times and see their progression. In the Junior A club riders Matt Minogue clocked a 34.50 sec lap. He was followed by Austin Timmins 36.37 , Alex Bennett 41.38, Matt Winchester 42.90sec. In the Junior B grade, Fleur Timmins was best at 45.00sec, followed by Thomas Fitzgerald 51.15 sec and Cody Cox 52.05sec.

To get the legs going the riders were given short scratch races. In the Junior A, Matt Minogue took out the win from Austin and Matt Winchester. In the B grade race it was Fleur winning from Thomas and Cody. In the senior race it was Thomas McFarlane winning from Ben and Kevin Feely.

For the Novice B grade it was Oliver McLean getting the job done ahead of Oliver Schmidt. In the novice A group Josh Chiavaroli grabbed the win but it was a major battle for the minor places with Michael Park taking second ahead of Roman Schmidt.

The riders were then given some 1 lap handicaps. First event saw Matt Minogue claim the victory from the scratch mark with a very slick ride racing past Alex Bennett in the last few metres. Austin Timmins claimed 3rd. In the B grade juniors, Cody Cox could see a win right from the start and flew round defying the chasers for the win from Fleur and Thomas. In the senior race Ben Stein performed similarly to take the win from Will Lumby and a fast finishing Thomas McFarlane.

In the B grade Novice handicap it was Oliver Schmidt winning the first race from Oliver McLean however in the re-handicap race the tables were turned. In the Novice A handicap, Josh Chiavaroli also did a win from scratch with a great ride. He was followed home by Michael Park and Harrison McLean. In the re-handicap it was Roman Schmidt who claimed the win from Brian Eldridge and Michael Park.

The re-handicaps for the club riders saw Austin Timmins winning from Matt Minogue and Alex Bennett in junior A grade. In junior B it was Thomas Fitzgerald from Fleur and Cody. For the seniors it was Ben Meadley winning from Will Lumby and Ben Stein.

By this stage of the night there were plenty of riders finding the short sharp efforts were taxing and legs were impacted by a lactic acid build up. However, the last rides for the night were another un of scratch races. In the Junior A, 5 lap race a move by Matt Minogue with 2 laps to go saw the field split , however, Austin was able to go with the move. In the dash to the line it was a very pleased Austin who had the fittest legs who claimed the win from Matt. Alex Bennett finished of a consistent night with another third.

The Junior B race saw Fleur grab an easy win from Thomas and a very tired Cody.

The 3 lap race between the Olivers saw Oliver McLean grab the win from Oliver Schmidt. In the novice A race Josh Chiavaroli raced away with 2 laps to go for a clear win. Michael Park showed plenty of speed again for second and a close fight for third saw Brian Eldridge get the honours.

The final race was an 8 lap scratch race for the seniors. Thomas McFarlane and Ben Meadley slipped away at the half way point and proved too strong for the chasers. In the final dash to the line it looked like Ben might come over Thomas however the younger legs of Thomas prevailed. Kevin Feely led home the chasers for 3rd place.

Training will again be on Wednesday night weather permitting. The club is still keen to see more new riders so if you are interested come along and try out. The Club still has some bikes it can put together for new riders. Racing again next Friday night will hopefully see a few more racing.