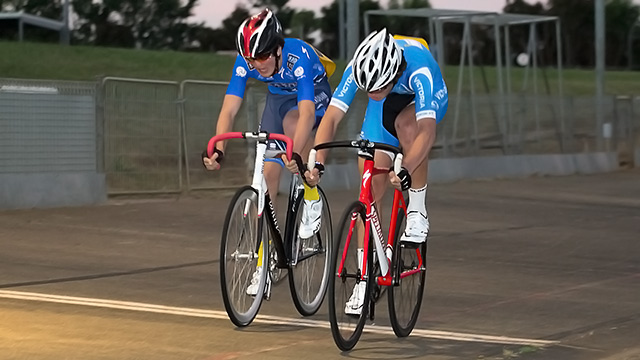 The ‘Boy’s in blue’ battle it out for the 8lap scratch race on Friday night. (26 event images)

Friday night produce another great night for racing – no wind and warm conditions.  However, it also is a busy time of year with some riders missing after school camps, some at the HPV meet at Maryborough and some getting ready for a pony club event over the weekend. The result was only 12 starters.  However, the great conditions saw several riders punch out new personal bests in the 1 lap time trial.  In the senior ranks, Austin Timmins continues to go from strength to strength and has Club star junior Thomas McFarlane in his sites.  After doing a new PB at Wednesday training he has re-set the mark on Friday night with a blistering 30.97 sec.  Next best was Will Lumby at 31.75sec, followed by Steve Allen 32.11sec.  In the Junior A group Bernadette Fiztgerald was quickest at 36.79 sec. However sister Kathryn at 37.60sec keeps clipping time from her PB. Similarly Alex Bennett clocked in a PB at 38.07 sec.  In Junior B Grade, Thomas Fitzgerald was around in a slick 41.80sec, Fleur Timmins at 43.03 sec whilst Kaleb Jans posted a PB at 44.84sec.  If the club can get him on a better bike he will take another large chunk of his PB.

“The Junior B 3 lapper went to a willing competitor in Thomas Fitzgerald ahead of Fleur and Kaleb.”

After the time trials it was a round of scratch races.  The Junior B 3 lapper went to a willing competitor in Thomas Fitzgerald ahead of Fleur and Kaleb.  In Junior A over 5 laps, Alex Bennett was fired up to grab a good result but could not bridge the bike length to come past Bernadette whilst Matt Winchester took third.  In the senior scratch race over 8 laps, Austin Timmins powered home a clear winner over Will and Steve.
The riders were then given some handicaps.  Junior B over 1 lap saw the first race go Fleur ahead of Thomas and Kaleb.  In the re-run it was Thomas Fitzgerald who grabbed the result on the line ahead of Kaleb and Fleur.  In Junior A division over 1 lap, the first race went to Bernadette ahead of Kathryn and Alex.  In the revised handicap, Bernadette was still too strong winning from Scratch ahead of Matt Winchester (35) and Alex (15).  In the senior group, the first handicap was over 1 lap and the scratch rider Austin, flashed round the field in the final bend to win from Will(5) and Steve(10).  In the 2 lap handicap it looked like Will Lumby (15) was in the best position at the bell getting a sit on the wheel of scratchman Austin.  However, down the back straight Austin went up a notch and rode away and scored another impressive win with Will and Steve (20) with the minor placings.

To keep speed in the legs the riders were given some sprint heats.  First up was a win to Thomas over Fleur and Kaleb.  Then Bernadette was too quick for Alex whilst Matt beat Kathryn with great tactics.  Into the senior heats and Austin kept a clean slate winning over Will.  In the second heat Lachlan Matthews took of at the start of the 2 laps to win ahead of Kevin Feely and Steve Allen.

The junior B had a 2 lap scratch race and this time it was a win to Kaleb over Thomas and Fleur.  The Junior B riders raced an Olympic sprint with the win going to Katherine and Alex over Bernadette and Matt.  In the senior field Lachlan and Will had a very narrow win over Austin and Kevin.

The final event was a junior elimination.  This proved to be an entertaining event. Bernadette claimed the win ahead of Alex and Fleur with some sensible riding from the front of the bunch.

Next Sunday the club will be loading out papers at 1.00pm so we need all hands on deck for that.  Training will again be on Wednesday night.  Last week several new riders tried their hand at the track so it is not too late to give it a try.

Last Tuesday night the AGM was held and the club has a new President – Lachlan Matthews. Kevin Feely is secretary and Stuart Smith is treasurer.  Several new committee members were also elected – welcome to Peter McLean and Dylan Adams.  It is great to see new faces running the club.