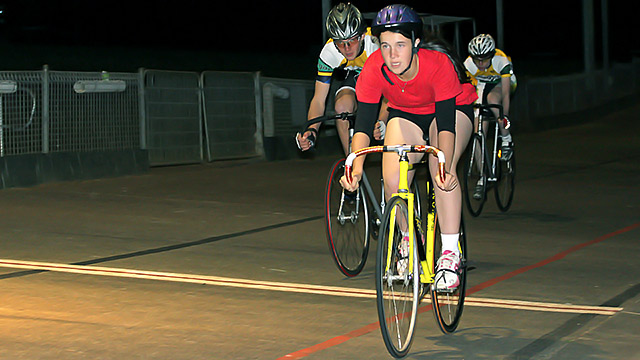 Friday night produced great conditions for racing – a warm track and no wind and a mild night to start with. After having around 25 riders on the track at Wednesday training including 4 girls, the combination of riders on the Great Vic Bike ride, racing in Melbourne and others back from school camps it was back to just 12 riders for race night. However the good conditions saw many riders posting personal bests for the 1 lap time trial.

In the Junior B division it was Brielle Cox, having her first race night for 2 years making a welcome return who clocked in at 41.15 sec – a time which will see her up to Junior A grade. Next was Oliver McLean at 44.37 just ahead of Fleur Timmins 44.77, Thomas Fitzgerald 46.94 and Cody Cox 52.98. In Junior A section Matt Minogue at 35.08 just edged out Austin Timmins at 35.65. Harrison McLean riding a new bike along with clip in cleats took a big swipe of his personal best to clock 37.35 whilst Grace McLean was on 40.39. For the Seniors it was Ronald Purtle, the new Club President at a slick 31.61 sec followed by Chris Rowe 34.42 and Kevin Feely – transferring from President to Club Secretary, at 35.97 sec.

Cody receives help before the Junior B 3 lap scratch race.

The warm up scratch races were next up. The Junior B 3 lap race went to Oliver from Fleur and Brielle with Thomas Fitzgerald putting in another grade ride to be just edged out in 4th. The Junior A race over 4 laps saw another tight battle with Matt Minogue winning from Austin and Harrison. In the Senior 6 lap race it was Ronald from Chris and Kevin.

The riders then had some handicap events. In the Junior B 1 lap event Brielle scorched the field from the 10m mark to take an easy win from Oliver and Fleur. In the re-handicap event it was Cody Cox on 80m making the handicap count as he held of a determined Thomas Fitzgerald (50) in second and Fleur (20) in 3rd. In the Junior A group, Harrison McLean (35) found the new rig worked a treat as he had a clear win form a fast finishing Matt Minogue (scr) and Grace McLean (55). The re-handicap saw Grace(55) keep it in the family winning from Austin(25) and Matt(scr). The senior 1 lap event saw Chris Rowe take the win from Kevin and Ronald. For their 2nd handicap the distance was lifted to 2 laps and this time it was Ronald winning from Chris and Kevin.

Cody and Thomas line-up for their match sprint race.

The next round of racing was some sprint matches. In the first Thomas accounted for Cody. Then in a close finish it was a narrow result to Oliver ahead of Fleur. In the next it was Grace winning from Brielle as the superior fitness was starting to tell for Brielle. Austin managed to control his race against Harrison to take the honours. Matt Minogue was given the task against Kevin and a slip in tactics perhaps cost him the race. In the final heat it was Ronald winning from Chris.

In what is proving a popular race format the riders were given an Olympic sprint with 2 rider teams on the track. In the first heat it was a narrow win for Fleur and Thomas over Cody and Oliver. In the next it was team McLean – Harrison and Grace with the win over Brielle and Austin. The final heat saw Ronald and Matt take the honours over Chris and Kevin. All these races were close results with only a few metres between teams at the end and plenty of barracking from the spectators.

The last round of racing was scratch races. In the junior B it was a very eager Oliver McLean who took out the 2 lap race from Fleur and Thomas. In the Junior A division, Austin Timmins kept his season record intact winning the last race of the night. This time it was ahead of Matt and Harrison.

In the senior race it was a 6 lap progressive points race and Kevin Feely rode hard for the first 2 laps pipping Chris Rowe each time to be on the points table with 3 points. However, Ronald had other ideas and quickly slipped away from the other 2 to take out the rest of the points and the race leaving Kevin in second and Chris at third.
Training will again be on Wednesday night weather permitting. It is a great chance for girls to give it a go as at present there have been 5 girls training. This will allow some girls only racing on race nights. Although as can be seen from the results the girls are proving very competitive in the races. The great interest this season will see the Club invest in some more bikes to assist novices to come and try at the track.

The Wednesday night annual general meeting saw a new generation take control of the Club. Ronald Purtle is the new President. Marie McFarlane is Vice President, Stuart Smith is Treasurer and Kevin Feely has shifted his talents to Secretary. We look forward to a new year of Club activities.