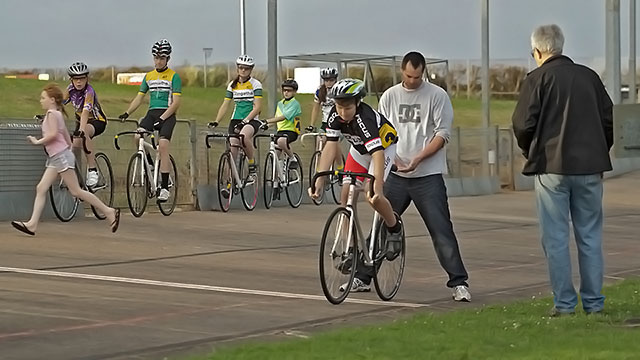 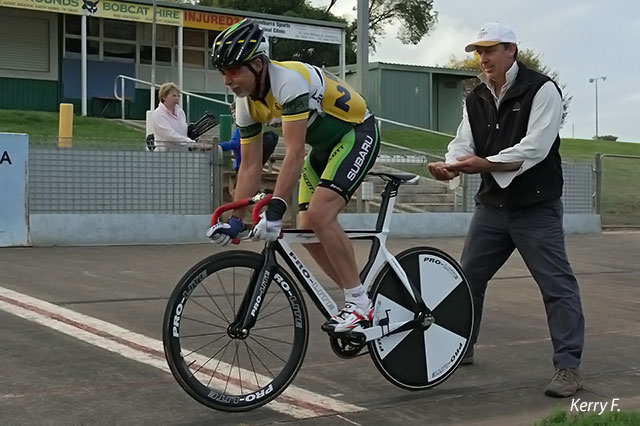 Kevin records a PB in the time trial

Friday night saw riders start the night with a cool southerly blowing which impacted the times in the first event, the one lap time trial.  However, the breeze later dropped and the thirteen starters had good conditions.  In the 1 lap time trial Josh Wight, Grace Allen, Katherine Fitzgerald and evergreen master, Kevin Feely all put in personal bests for the season.  Other riders also in good form for the night were Will Lumby and Harrison McLean.  Harrison has been using the holidays to lay down plenty of training on the roads and this week the effort suddenly translated to a boost in the track performances.

For the one lap time trial, in the Juniors Oliver McLean was quickest at 38.58 sec.  Michael Eastwood on a new bike which suits him better was next at 40.02 sec whilst Thomas Fitzgerald was third quickest at 41.31 sec.  In the senior ranks Austin Timmins took 31.45 sec just ahead of Will Lumby at 31.90sec and Harrison McLean at 33.27 sec.

Next events were the handicaps.  In the junior 1 lap dash, Grace Allen, (40m) using clip in pedals for the first time held of the challenges to take the win ahead of Michael Eastwood (15) and Jack Allen (35).  In the re-handicap, Jack Allen (30) kept it in the family as he took the win just ahead of Josh Wight (35) and Kaleb Jans (25).

“In the junior 1 lap dash, Grace Allen, (40m) using clip in pedals for the first time held of the challenges to take the win ahead of Michael Eastwood (15) and Jack Allen (35).” 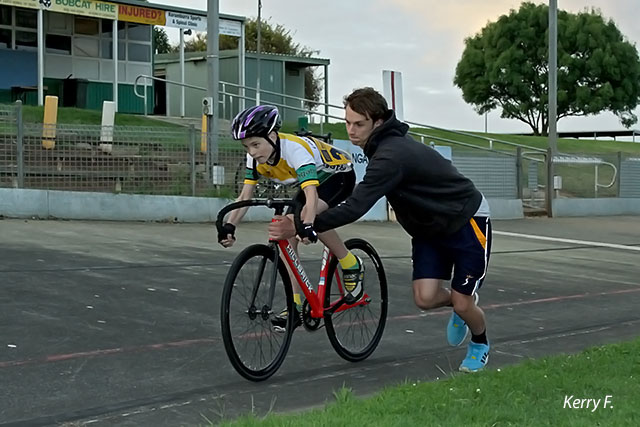 In the senior handicaps over 2 laps, the first race saw the limit markers control the race with Harrison McLean (70) taking the win ahead of Bernadette Fitzgerald (100) and Kevin Feely (85) third.  In the re-run, the limit markers were not able to back up in the short interval and the backmarkers came through with Austin (scr) taking the win from Kevin Feely (80 and Will Lumby (scr) third.

The junior riders were then sent on their way for an elimination.  Once again the Allen’s were sticking together as both Jack and Grace took a fall just after the start.  After the re-start, Oliver McLean took the honours but found Michael Eastwood put up plenty of resistance.  Thomas Fitzgerald took third place.  In the senior elimination, Austin Timmins controlled affairs to take the win from Harrison and Kevin Feely.

“In the first heat, Thomas Fitzgerald had a narrow win over Kaleb Jans and Josh Wight.”

The juniors had a sprint round.  In the first heat, Thomas Fitzgerald had a narrow win over Kaleb Jans and Josh Wight.  In the other heat, Oliver was too quick for Michael.  The seniors had an Olympic sprint and the winning team was Austin, Harrison and Katherine over Will, Bernadette and Kevin.

Last events for the evening were scratch races.  The junior race over 5 laps saw Oliver take another win ahead of Thomas and Michael.  In the senior race over 8 laps, Austin had a narrow win over Will and Harrison.

The club wishes Thomas McFarlane all the best for the National Titles next weekend.  Also in action over next weekend will be Austin Timmins at the State Titles.  The club is planning on conducting the Club Titles on Feb 6.  The riders are also keen for a short madison ride before season end and if enough starters present this could occur on Feb 13.  Riders will need to practice some changes at training in the lead up to the event.

The club was also thrilled to have 5 new riders at training on Wednesday night.  This will swell the ranks of junior riders and allow some extra grades to be run.  In addition the club is also planning for an early start to road season – Sat 14 March is the start date for the season. This will mean some riders will be looking for road bikes between now and then.  Some of the juniors are starting with the training rides of a Saturday and Sunday morning and along with Mums and Dads also on the bike there have been plenty of riders on the roads over January.