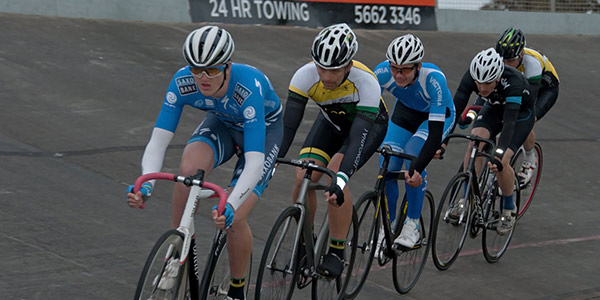 Friday night saw a good field of senior riders and a new junior face at racing. At the start of the night there was a cold wind blowing however that eased over the course of the evening. Following a week of cold and showery weather the track was also cold and not conducive to quick times and that was evident in the results of the 1 lap time trial with no riders managing to post a new season best time. Whilst the turn-out was good it does not match the Wednesday training night where some 20 riders are keeping the club coach busy. On Wednesday night 2 of the members who have undertaken the coaching theory tests were on hand to investigate the practical sessions. Stuart Smith was well able to contribute but Stefan Kirsch, new to track racing, found the session an eye opener. He was amazed that the session went so smoothly when there is a big range of age groups and abilities all trying to log a productive training session.

The first up time trial on Friday night saw Will Lumby clock a 31.40 sec followed by Austin Timmins on 31.72s ec. Steve Allen was not far behind at 32.63 sec. For Austin it was the first lap of a 2 lap effort that coach Tony Smith request he ride. To make matters worse for Austin he was pushing a big gear which he never really looked like he was able to push. For the juniors Felicity Waddell at 40.38sec was marginally ahead of Kaleb Jans 40.52 sec whilst Caleb Murphy was an improving effort at 43.51sec. New rider Tyler Chadwick was a bit rough at the start and recorded a 54.64 sec so we can expect him to take chunks out of that time over the season.

On the last bend of the scratch race, it was Caleb holding off Felicity.

The 4 lap junior scratch race came down to an effort over the last lap and Kaleb Jans scored the win ahead of Felicity and Caleb Murphy. The senior 8 lap scratch race saw Will Lumby took quick in the dash to the line for Austin Timmins and Steve Allen.

The riders had little rest before they were into the handicaps. In the junior 1 lap dash, the first race saw Felicity (10m) fly of the mark and round up all starters for a win ahead of Kaleb Jans (scr) and Caleb Murphy (25) After the handicapper looked at these results he sent them back out and this time it was a narrow win to Kaleb Jans (10) from Tyler Chadwick (85) and Caleb Murphy (35) so it is amazing what a small change does.

“In the senior 1 lap dash, Dylan Adams (40) was glad to chase down the out-markers to take the win from a fast finishing Will Lumby (scr)”

In the senior 1 lap dash, Dylan Adams (40) was glad to chase down the out-markers to take the win from a fast finishing Will Lumby (scr) and Austin Timmins (Scr). In the following 2 lap handicap, Steve Allen (50) kept powering along to round up the outmarkers and take the win just ahead of Oliver McLean (80) and Dylan Adams (60) with the scratch riders unable to bridge the gaps.

The juniors were sent out for some sprint heats, The first race saw Felicity keep her sprinting crown as she secured the win over Kaleb. In the other heat it was Caleb Murphy showing new rider Tyler a rear wheel all the way for a win. The seniors were split into 2 teams of 3 riders for an Olympic sprint and save for a tardy start from Dylan the end result may have been closer than the 10m separation that resulted. The winning team was Steve Allen, Kevin Feely and Will Lumby at 49.48 sec ahead of Austin, Oliver and Dylan at 50.53 sec.

Last races for the evening were another round of scratch races- the junior race over 6 laps produced another win for Kaleb Jans ahead of Felicity Waddell and Caleb Murphy. In the senior race over 16 laps, the pace was steady and Steve Allen up the pace around mid race and did 3 laps on the front of the bunch. However, just after he finished his turn, Will Lumby jumped out and in initiated some further action. Austin quickly covered the move and the others were left trying to close the gap. They almost closed down the break but another turn of pace from Austin broke the determination of the chasers save for Oliver McLean who made contact with a lap to spare before the last lap. Austin set up his winning move with good track craft and once he made the decisive move it was all over as he cruised to an easy win ahead of Will and Oliver.

The Club is hoping several of the new riders training Wednesday night will make the step of racing next Friday night or swap their “ride” licence for a ‘racing” licence. The Wednesday night efforts are showing some riders with lots of potential if they can switch to racing. The Club has a range of bikes available for any one to come and try riding at the track. Often people think that it is hard and they cannot manage the step but most find it is pretty easy and quite a buzz to speed round the track. Come down to the track of a dry Wednesday night at 6.00pm to whet your appetite.