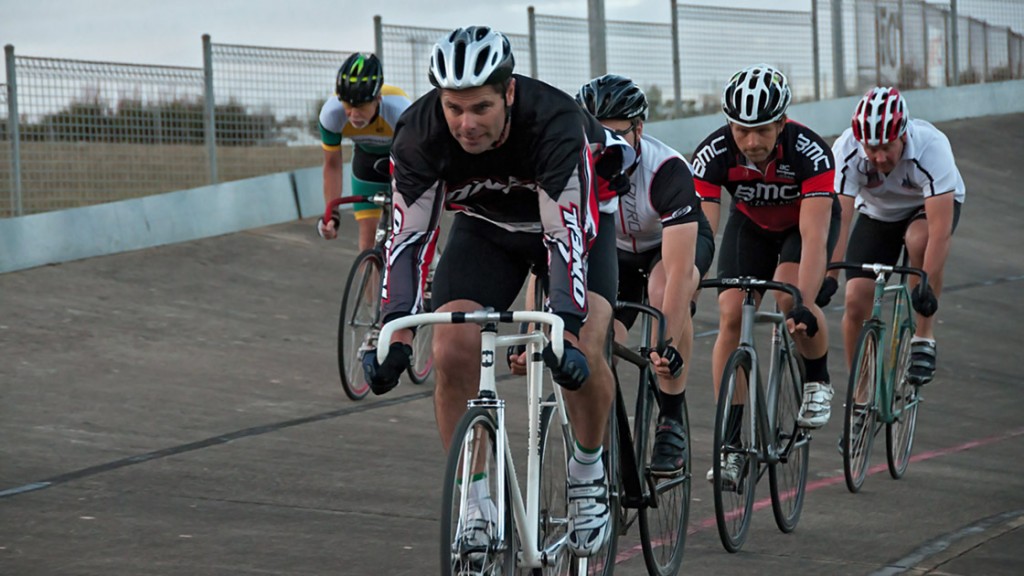 Friday night saw a good roll up of junior track riders and helped the club run the Club Track titles for this group.  The club has had several juniors come along to training on Wednesday night over the past few weeks and Friday night saw Caleb Murphy line up for his first race night so it was a big learning curve for him.  Weather conditions were pretty good and that helped make a good night of racing.  Austin Timmins was away competing in Tasmania as part of the Victorian Junior team at the National Titles.  In a great result he picked up a silver medal in the M17 team pursuit and also finished in 6th place in the individual pursuit a new personal best.

First racing for the night on Friday was the 1 lap time trial.  In the senior field the best time went to Steve Allen 32.18 followed by Rob Waddell 35.90 and Graham Hans at 36 sec.  In the juniors Oliver McLean was feeling the pressure from Thomas Fitzgerald from the previous week and responded well with a new personal best and quickest time of 34.93 even with a poor start.  Next was Thomas at 37.08 sec but down on his best due to some dental work the previous day.  Kaleb Jans was in third place at 39.00 sec.

The senior scratch race over 6 laps saw Steve Allen take the honours from Rob Waddell and Graham Jans whilst the junior field of ten riders was split into an A and B fields.  The A grade 4 lap race went to Oliver McLean whilst Kaleb Jans put in a great ride to take second ahead of Thomas Fitzgerald.  In the B grade field Felicity Waddell rode a patient race before racing home strongly ahead of Sulli Herbert and Harry Herbert.

The next round of racing for the juniors was the track Title sprint derby.  In heat 1 Kaleb Jans and Oliver Mclean were the first two moving into the final whilst the second heat saw Josh Wight and Thomas Fitzgerald make it through to the final.  In the sprint derby final it was a clear win to Oliver from Thomas, Kaleb and Josh.  In the consolation sprint derby it was Felicity winning from Jack Allen and Harry Herbert.

The juniors finished their track titles with a 5 lap scratch race and following a sedate first few laps Oliver lifted the pace and spread the field making sure of the win.  The minor placings went to Thomas and Kaleb.  The club title placings were also in the same order.

The senior 2 lap handicap saw Michael Blogg (140m) ride strongly to take the win just ahead of a bunch finish which saw Steve Allen (scr) take 2nd and Kevin Feely (40) in 3rd.  The junior handicap saw riders split into 2 heats – a front markers heat and a back markers heat, which was a new experience for these riders.  In the first heat Jack Allen, Josh Wight and Kaleb Jans were the three to make it to the final.  In the second heat it was Nick Blogg, Felicity Waddell and Sulli Herbert through to the final. In the final, Nick Blogg (100) was again away to a good start and powered home a narrow winner from a charging pack which saw Kaleb (30) grab second and Felicity (45) sneak home for third.

The senior re-handicap over 2 laps saw Graham Jans (85) make the most of a 15m lift in mark take the win from Rob Waddell(60) and Kevin feely (45).  This was followed by an 8 lap scratch race which once again saw Steve Allen beat of the challengers leaving Kevin Feely in 2nd and Rob Waddell in 3rd.  To fill out the program the seniors also had 2 sprint heats.  In the first, Kevin Feely had a narrow win over Rob whilst in the second heat it was a win for Graham Jans ahead of Michael Blogg.

Next Friday night the Club will run the senior track titles.  The Club is also expecting some members to be on hand for the Koonwarra rail trail opening at 3pm in the afternoon.  As usual members have been busy racing at other venues – Harrison McLean grabbing a win at the Sunday morning criteriums at Warragul.  This past weekend Bernadette Fitzgerald was part of the Gippsland Gold team racing in the State cycling road series in East Gippsland.  Thomas McFarlane is putting in some impressive training behind the motor pacer on Wednesday night training in preparation for his ride in the Bendigo Maddison over the March long weekend.  Many of the road riders are getting ready for a road season start in mid April.  The great weather is also seeing a number of girls/women getting out on the bike with the Club moving to try and get a regular girls riding group out and about.