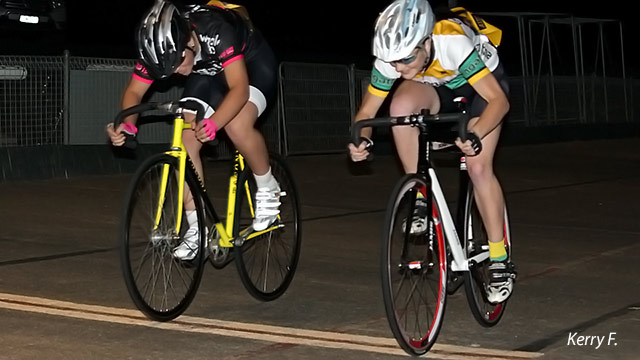 Friday night was another pleasant evening at the track with riders putting on some spirited racing and with just next Friday night to come for the current track season.  Next Friday will be a short program followed by a sausage sizzle.  The one lap time trial saw several riders set new personal bests. 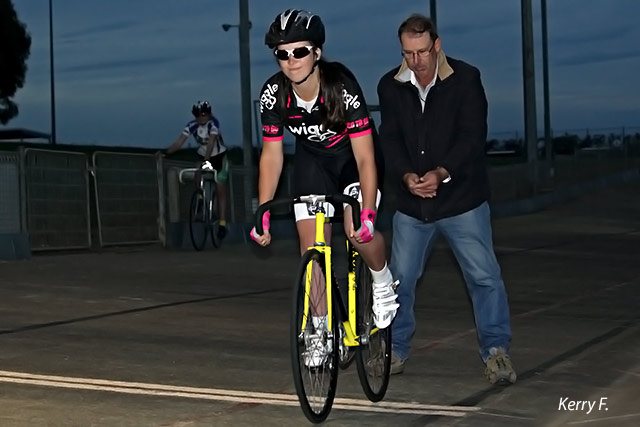 The junior 4 lap scratch race went to Oliver McLean ahead of Thomas Fitzgerald whilst Michael Eastwood finished strongly to grab 3rd place.  In the senior 8 lap scratch race the pace was on all the way with several attacks so that at the end there was no bunch left to sprint. Austin Timmins rode off all challengers to record the win ahead of Will Lumby and Steve Allen.

“Jack Allen who had held the trophy since last year was all fired up once again. He hit the front at the 200m mark and defied the bunch of challengers behind to again take the trophy race.”

The junior handicap was the Jack Edney Trophy.  Jack Allen who had held the trophy since last year was all fired up once again.  He hit the front at the 200m mark and defied the bunch of challengers behind to again take the trophy race.  Fleur Timmins raced right to the line to secure second whilst Thomas Fitzgerald just had the wheel in front of a line of riders grabbed third place.

The seniors moved onto a round of sprints.  Bernadette won the first from Grave and Katherine.  In the second heat it was Harrison McLean with a throw on the line who claimed the win ahead of Dylan and Kevin.  In the third heat, Lachie Matthews made the early move but then allowed Steve Allen back into the race and he duly hit the line first.  In the final heat, Austin lead out and Will looked a chance going into the last 100m but Austin finished strongly for the win.

The juniors then raced a points score over 9 laps with a sprint at 6 laps, 3 laps and the last lap.  Oliver McLean (15pts) controlled the race with Thomas Fitzgerald (9pts) and quickly racked up the sprint points.  Fleur Timmins (6pts) battled hard but could not quite move with the two leaders.  Josh Wight (2pts) was the best of the others.

The junior team sprint was won by Thomas, Fleur and Max by a narrow margin over Oliver, Josh and Jack.  In the next heat it was a narrow win to Bernadette and Kevin over Grace and Katherine.  In the senior group, the winning team was Austin, Lachie and Harrison.

The last event for the night was a senior elimination. Austin Timmins claimed the win from Will and Dylan with some strong riding at the front of the bunch.

Tuesday night the club has a meeting at Steve Wilsons to discuss the road season aggregate points.  All riders are invited to attend to steer through an outcome which suits all riders.