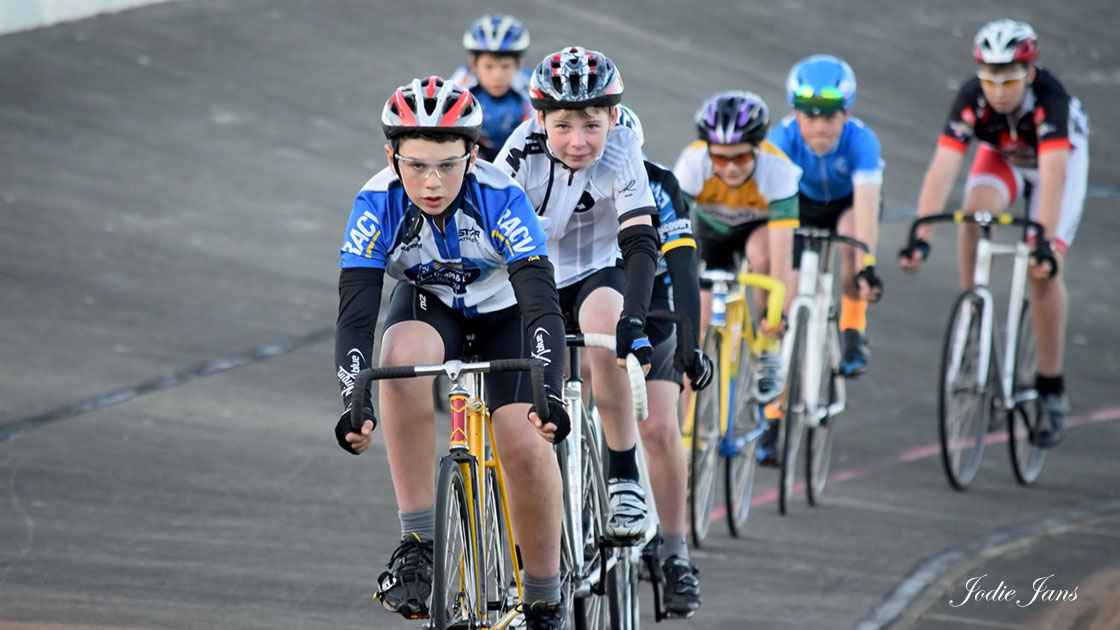 Friday night racing started at an earlier time slot (7.00pm) and with a cold wind blowing however as the evening progressed the wind dropped and it was a fairly good night for racing. With 17 riders racing there were 9 riders who posted a personal best in the 1 lap time trial. The effort the riders and coach Tony Smith put in of a Wednesday night is showing in the improving times the riders are recording.

In the senior field Austin Timmins clocked a very slick 30.80 sec lap. Next time was Dylan Adams at 33.95 sec just ahead of Lachie Matthews at 34.22 sec for his first night of the season. Bernadette Fitzgerald was neatly off the mark in clocking 34.27 sec just beating Dane Herbert at 34.56sec. Near misses was almost the tag line for Dane over the night.

In the junior field, the riders all keep improving. Oliver McLean clocked in at 35.50sec to stay ahead of Thomas Fitzgerald at 37.50 whilst Kaleb Jans was under 40 sec at 39.65 sec. These riders were all on personal bests. Sulli Herbert and David Eastwood also clocked in new personal bests.

Kaleb during the Junior A 4lap scratch race.

A round of scratch races followed. The senior 8 lap race saw Austin Timmins cruise round for the win ahead of Dylan Adams whilst Grace McLean rode a smart race to move into third place. The junior A grade over 4 laps saw Oliver win from Thomas and Kaleb.

With a shortage of holders for the senior field the race format was altered with the seniors racing a 10 lap progressive points race. Graham Jans took the early points followed by Lachie Matthews. Grace McLean was attentive and snared the points on lap 3 and 7 whilst Bernadette grabbed the points on lap 4. Austin Timmins who had been biding his time flicked Dane Herbert at laps 5,6 and 8 and Dylan Adams at lap 9 to secure the points to win from Grace and Bernadette.

The junior A grade also were keen to try the format and Oliver went about taking all the points for the win. In junior B grade, Felicity grabbed the points on laps 3 and 4 to overhaul Sulli who had taken the points at lap 1 and 2.

The juniors raced a 1 lap handicap with Oliver McLean giving away a start of 60m to David Eastwood and Harry Herbert. In a close result for the handicapper Harry scored a narrow win over Sulli and David with the rest of the field all within 2 bike lengths.

Riders raced a round of sprints to keep speed in the legs. Austin Timmins won his heat over Dylan and Lachie. Bernadette had a narrow win over Kevin and Grace and Graeme Jans took the win over Dane Herbert. In the junirs it was Oliver over Thomas, Kaleb over Josh Wight, Michael Eastwood over Harry Herbert and Felicity Waddell whilst Sulli Herbert won his heat with David Eastwood.