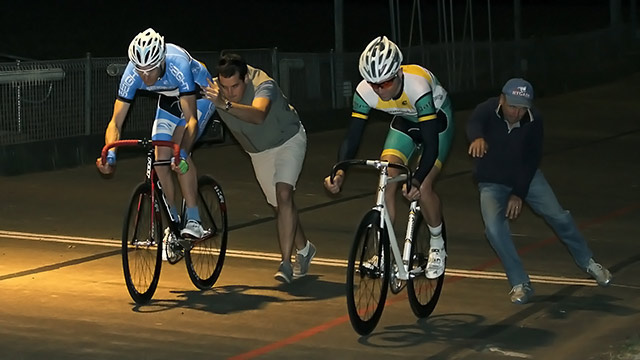 Back markers underway in the Senior 800m handicap (32 event images)

Another great Friday night for track racing once again produced some great action at the velodrome. Members were inspired by the great results Thomas McFarlane was achieving at the National Titles and for the new members to cycling they can see that the great coaching the receive at Leongatha can take them to the top.

“In Junior A, Harrison McLean made a move before the bell…”

Scratch races followed and in Junior B it was a close tussle but Oliver crossed first followed closely by Thomas, Jack and Cody.  In Junior A, Harrison McLean made a move before the bell and opened up a gap the others could not bridge winning from Matt Minogue and Alex Bennett.  In seniors it was Ben Meadley coming around Ronald and Steve claiming the win.

The handicap rounds were next up.  In Junior B, Jack Allen was going well an took out the first race from Cody and Oliver. In the re-handicap it was Oliver from scratch who finished quickly grabbing the win from Jack and Thomas.

“In Junior B, Jack Allen was going well an took out the first race from Cody and Oliver.”

In Junior A, Matt Minogue was in great form winning the first from scratch with Harrison 2nd and Grace 3rd.  The handicapper had another try but again it was the same order.  In the senior handicap Ben Meadley from scratch who tool out the win from Ronald and Steve.  The seniors had a sprint derby instead of a second handicap but again in was a Ben, Ronald and Steve finishing order.

The popular Olympic Sprint events were next up.  In junior B, the team of Oliver and Cody finished up by just 0.2 of a sec for the win over Thomas and Jack.  In junior A grade it was Bernadette and Grace getting the job done against Harrison and Alex.  In the senior race Ronald and Steven won by just 1/100 of a second over Matt Minogue and Ben Meadley.

To finish the night, Junior B raced an elimination and Oliver had a narrow win from Thomas whilst Jack was third.  In Junior A it was Harrison winning from Bernadette in second and a tired Matt Minogue in third.

There will be no racing next Friday night of the long weekend.  However, training will be on Wednesday night next week and the following week with a last night on Friday March 14 with a short racing program and presentations for the season afterwards.  Road season is scheduled to start on April 5th at Pound Creek whilst the John Sauvarin memorial social ride is scheduled for April 6th.

We also congratulate Thomas McFarlane on his 3 gold medals and bronze medal at the National Track Titles in Sydney this past week.

This weeks raffle prize was kindly donated by Bicycle Superstore.