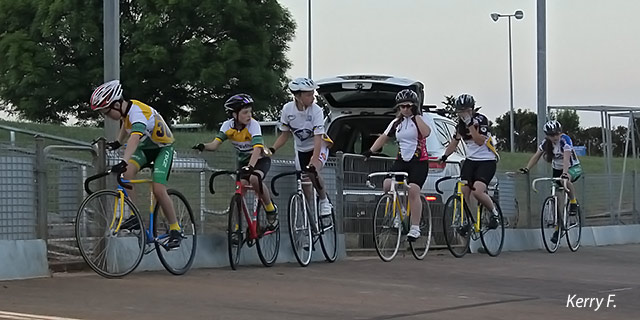 Friday night started off with a cold wind but after around 15 minutes the wind died down leaving riders to battle a cool evening.  With several riders away on the Great Vic Bike ride, others at a party plus several Christmas functions the Wednesday night training numbers of 24 riders dwindled to just 12 starters.  However, the riders produced some great riding and along the way pumped out some personal best efforts.

First rides of the night were the 1 lap time trial.  In the juniors Grace McLean clocked 36.64 which was only just ahead of a personal best from Katherine Fitzgerald 36.90sec.  Third best time went to Oliver McLean in 40.40sec.  Onto the senior field and the times were sensational. 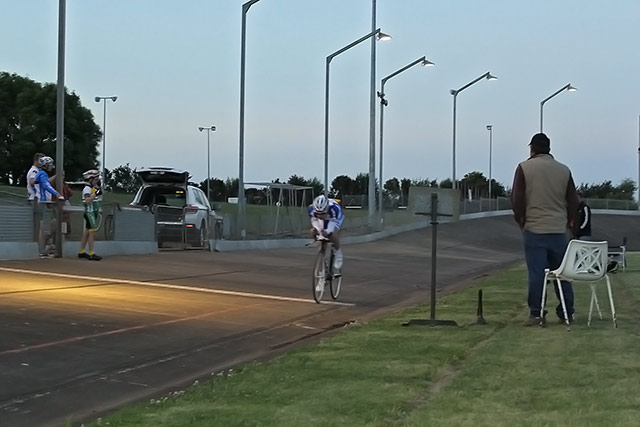 “Thomas McFarlane who was busy doing special work with coach Tony Smith, had been alerted to the rapid improvement from other riders was up to the challenge and flew round the track to clock an amazing 29.20 sec.”

Thomas McFarlane who was busy doing special work with coach Tony Smith, had been alerted to the rapid improvement from other riders was up to the challenge and flew round the track to clock an amazing 29.20 sec.  Austin Timmins also chalked up a new personal best of 30.7 sec continuing his run of new PB’s every-time he takes to the track.  Third best time went to Ron Purtle with a 31.25 sec lap.  A couple of seasons back this would have been a best time.  New rider Grant Millen at his first night put in a commendable 32.51 sec. 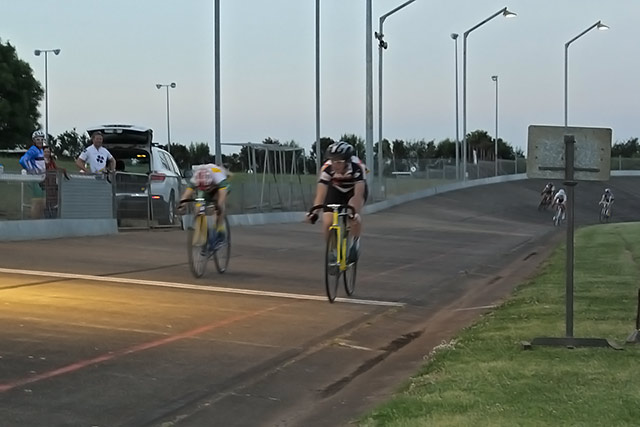 “…first race a 1 lap handicap. Grace McLean (Scr) swept round the field in the finish straight to take the win just ahead of Katherine…”

The junior 5 lap scratch race saw Grace McLean with a handy break lead into the home straight then have to work hard to hold out a fast finishing brother Oliver whilst Fleur Timmins secured third place.  In the senior 8 lap scratch race, Austin Timmins had control of the race at the bell and kept increasing the pace into the back straight. Harrison McLean had the sit but did not have the speed to challenge in the run to the line.  In a further good showing of sprinting power Grant Millen grabbed the third place.
The junior riders were able to get some handicap rides in with the first race a 1 lap handicap.  Grace McLean (Scr) swept round the field in the finish straight to take the win just ahead of Katherine Fitzgerald (10) and Fleur Timmins (30) in third.  In the second handicap over 2 laps it was Grace McLean (scr) making it a double.  This time shw won from Oliver McLean (45) and Thomas Fitzgerald(60).

The senior field did not have enough pushers to run a handicap so their second race was a progressive points scratch race over 10 laps.  The early points went to Ronald, Grant and Rob Waddell.  At this stage Austin Timmins swept to the front in a decisive move.  Grant tried to go with him but wilted under the onslaught.  Austin went on to race the next 6 laps on his own and take the rest of the points in a convincing win.  Rob Waddell with his 3 points secured second place whilst Grant Millen with 2 points was third.

The junior riders were given some sprint heats. First up Oliver won from Thomas. In the second it was Fleur winning from Felicity Waddell whilst the last heat it was Grace winning from Katherine. 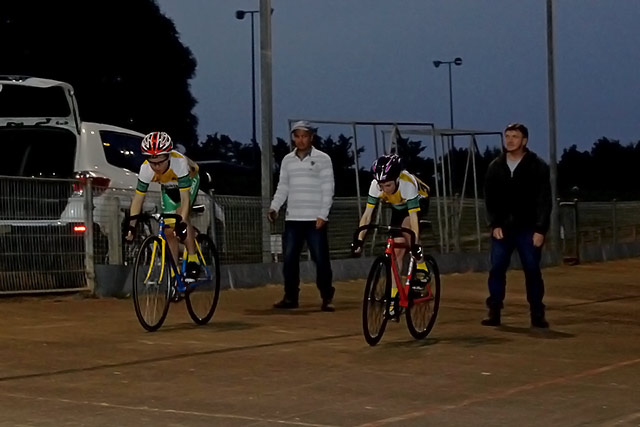 “First up Oliver won from Thomas.” 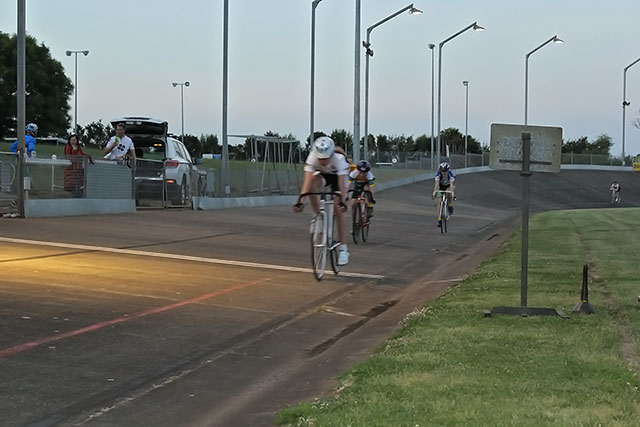 The senior sprint heats proved interesting with Dylan Adams winning from Rob Waddell in a close tussle. In the second it was Grant Millen narrowly from Harrison McLean whilst in the last heat Austin Timmins produced a winning dive from the bank just after the bell to take the heat ahead of Ron Purtle. The sprint final put the three winners into a race of. Dylan Adams made a move with over a lap to go but Austin was quick to cover the move with Grant stuck on the wheel. The super fit Austin wound out the bike to take a great win ahead of Grant.

The ever keen juniors raced an elimination. Grace McLean saw of the challenges including a last lap fight with brother Oliver to take the win. Fleur Timmens rode well to take third place. In the senior elimination it was Austin Timmins who controlled the race to take the win. Ronald Purtle rode his usual great race but had to settle for 2nd whilst Dylan Adams surprised with a fine ride into third place. After several nights of racing he is starting to find his way with the racing.

To finish of the evening the juniors raced a 4 lap scratch race. This time Grace sat out the race so brother Oliver stepped up and took the win from Katherine Fitzgerald and Fleur Timmins.

Wednesday night training is proving popular with several new junior riders in action. The club is chasing up some more small frames to get them into racing. It is a great time for new riders to join in with the other newcomers. Boys and girls along with older riders are all welcome. There are only 3 more race nights before the Xmas break of 4 weeks.