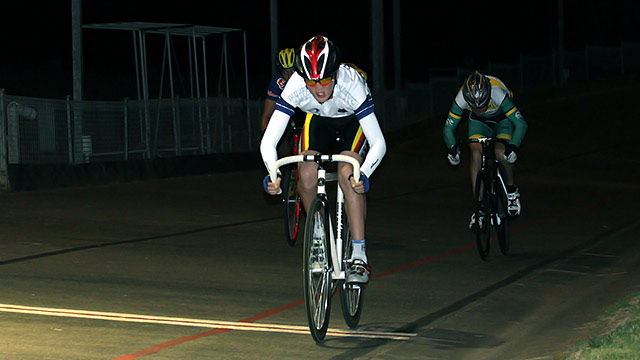 Each week the club has had a different scene at Friday night racing. Even if the night is cool there has been plenty of hot action on the track and plenty of close finishes. This week the handicapper had 7 seniors to work with and 4 girls racing. In addition Club coach Tony Smith had the motor bike out for some pacing duties. This was also the end of the five week trial period for novice riders which has been a great success this season.

As usual first event of the night was the 1 lap time trial. In Junior B it was Oliver McLean quickest with a 45.69. He was followed by Jack Allen, 47.39, Thomas Fitzgerald 48.13 and Oliver Schmidt at 52.40 sec. In the Junior A section, Austin Timmins after doing a session on Tuesday night at coach Tony Smiths shed on the ergo bike managed to record a PB at 34.33sec. He was followed by Matt Minogue 35 sec and Harrison McLean also with a PB at 35.40 sec. It is producing some close racing between them. In the girls group, it was Grace McLean doing a 39.69 sec, followed by Brielle Cox 41.89. With nothing between them it was Bernadette Fitzgerald at 40.92 and the youngest member Fleur Timmins at 46.84sec.

The senior time trial also produced some close times but best for the night was Thomas McFarlane at a sizzling 30.54 sec. This was after the coach had him do around 4 efforts in the warm up before racing. From there it was very tight. Ronald Purtle 31.30, Josh Chiavaroli 32.01, Steve Allen 32.06, Ben Meadley 32.17, Will Lumby 34.48 and Kevin Feely 35.42 sec.

“The Junior B race over 2 laps went to Oliver McLean ahead of Fleur Timmins and Oliver Schmidt.”

The riders then had some short scratch races whilst the handicapper went to work. The Junior B race over 2 laps went to Oliver McLean ahead of Fleur Timmins and Oliver Schmidt. In the Junior A division it was Austin Timmins winning from Matt Minogue and Harrison McLean. In the senior 8 lap race Thomas McFarlane had a narrow win over Ben Meadley and Steve Allen.

The first round of the handicaps were then quickly run through. In the Junior B 1 lap dash it was Jack Allen winning from Oliver McLean and Fleur Timmins. In the re-handicap it was Thomas Fitzgerald winning from Oliver McLean and Fleur Timmins. In the Junior a division 1 lap dash it was Harrison McLean winning from Matt Minogue and Grace McLean. The re-handicap saw Harrison chalk up another win but this time it was just ahead of Austin and Bernadette. For the senior riders the handicap was over 2 laps. First time round it was a sensational win by Thomas McFarland , riding from scratch, just catch Will Lumby (80) on the line whilst Josh Chiavaroli (70) was third. Next time around it was another great result with Kevin Feely (110) looking to be beaten at 200m to go fighting back to win narrowly from Ben Meadley (30) and Will Lumby (80).

The referee then lines up some sprint races.  First heat saw Thomas Fitzgerald win from Oliver Schmidt. In the second race it was Oliver McLean accounting for Jack Allen. In the girls race, it was Bernadette Fitzgerald claiming the win from Fleur Timmins. In the Junior A boys it was Austin getting the jump on Matt and Harrison claiming the win. The senior races saw Will take the first heat from Kevin and Josh. In the second it was Ben winning from Steve Allen whilst in the last it was a win for Thomas McFarlane over Ronald Purtle.

The Junior B boys had an Olympic Sprint event. The team of Jack Allen and Thomas Fitzgerald had a narrow win over Oliver Mclean and Oliver Schmidt. In the senior Olympic Sprint it was the team of Ben, Ronald and Josh with a 1 sec win over Thomas, Steve and Will.

“The girls fronted up for another sprint round and this time it was Grace winning from Bernadette and Fleur.”

The girls fronted up for another sprint round and this time it was Grace winning from Bernadette and Fleur. Matt Minogue and Kevin Feely had another sprint race to see if Matt could redeem himself after last week’s effort. However, whilst he was much closer the older legs saw Kevin triumph once again.

The last round of races saw the Junior B riders with another 2 lap scratch race. Once again it was Oliver McLean just managing to hold out a determined Fleur and Thomas Fitzgerald. The Junior A riders raced an elimination race for the first time of the season and Austin Timmins completed a successful night by once again winning the last race from matt and Grace. The seniors finished the night with a 12 lap motor paced scratch race. A couple of riders found the pace too hot and failed to finish. In the end it was a battle between Thomas and Ben up the straight with Thomas taking the win ahead of Ben and Ronald.

Ben did have another win for the night – the raffle for the night. With plenty of great racing and spectators the club has reintroduced a nightly raffle to help defray costs of running the lighting. We invite any interested to come along of a Friday night and have a look at the action. Anyone keen to try track riding is invited to come along of a Wednesday night at 6.30pm to see about having a try out. Otherwise there is always a bunch at 8.00 am on a Saturday or Sunday leaving the corner at the Leongatha Post office happy to have an extra face in the bunch.

report by Lindsay Love.
Images           (apologies to Bernadette for missing your ITT start)