“In the senior scratch race over 8 laps, Harrison took the honours…” (37 event images)

Friday night was a cool night not conducive to setting great times but the competition was still hot as the club welcomed a contingent from the Latrobe Valley club.  The Latrobe Valley Club has a big day meeting scheduled for Feb 8 and will be keen to see the Leongatha riders in action at the Newborough Velodrome. 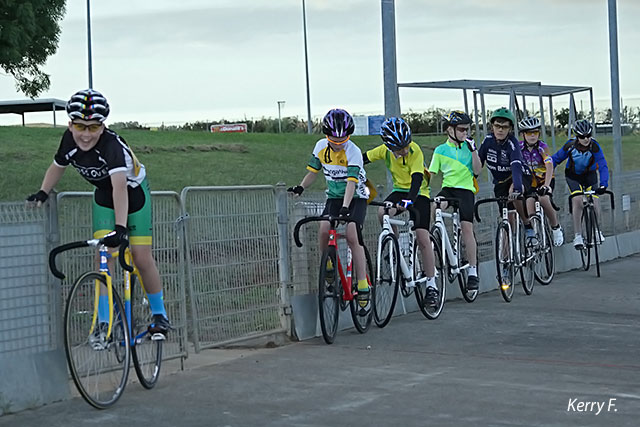 “The large field of juniors raced a 5 lap scratch race and Oliver McLean took out the race from an in form Thomas Fitzgerald and Michael Eastwood.”

After the scratch races it was onto the handicap events.  The junior 1 lap race saw Kaleb Jans (20) overhaul Josh Wight (35) on the line with Bryce Nightingale (LV, 25) taking third whilst the backmarkers were moaning about trying to get around lots of riders.  In their next handicap, over 2 laps it was the backmarkers who cleaned up – 1st to Oliver McLean, 2nd Thomas Fitzgerald and 3rd to Kaleb Jans (30). For the girls 1 lap handicap Bernadette Fitzgerald (scr) rounded up the leaders with 100m to go for an easy win over sister Katherine (25) and Fleur Timmins (30) in third.  In their 2 lap handicap it was Bernadette chasing down the gaps who was again successful this time ahead of Fleur (45) and Felicity Waddell (60)  In the senior 1 lap dash it was Harrison McLean (10) with the win ahead of Dylan Adams (25) and Ask Kozak (LV, 20). For their 2 lap handicap it was Ask Kozak (40) taking the win ahead of Dylan (35) and Kevin Feely (55) hanging on for 3rd.

The riders then raced team sprints.  In the junior section the winning team was Oliver, Michael, Jack Allen and Bryce Nightingale.  For the girls the winning team was Katherine and Fleur and in the seniors it was Steve Allen, Ask Kozak and Kevin Feely with a narrow win. 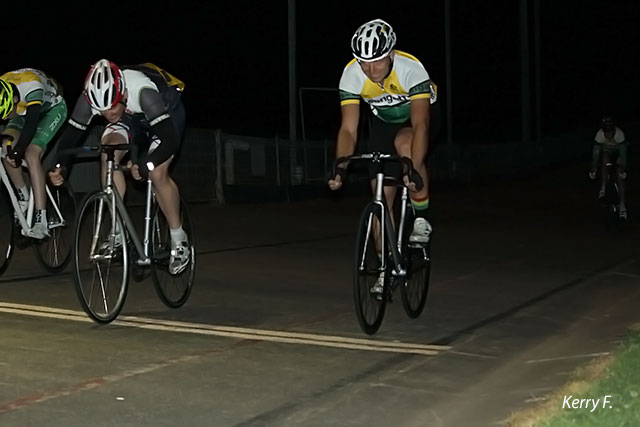 The last rides for the night were another round of scratch races.  In the junior 4 lap event, Oliver McLean chalked up another win over Thomas Fitzgerald and Michael Eastwood.  In the girls 5 lap handicap it was Bernadette winning from Katherine and Fleur.  The senior 5 lap race to finish the night saw Dylan Adams score a narrow win over Steve Allen and Harrison McLean.

Next week the club will conduct Club title races for the juniors only as several of the seniors cannot attend that weekend.  The racing is hotting up as there has been a host of riders out training of a Saturday and Sunday morning.  Some are going at 7.00am whilst others go at 8 and 9.00am.  Get fit and join in with a group of riders.

At the National Elite titles over the weekend, Thomas McFarlane took Gold in the Team Sprint with his 2 team mates breaking the record for the event.  He also claimed 2nd in the Under 19 Kierin.  His teammate, Connor Rowley won the event.  Earlier at the meet he was 4th in the scratch event.  However, the South Australian and NSW riders appeared to be the dominant force at the titles.