The Christmas party time impacted numbers at racing on Friday night even though it was a very pleasant evening with great conditions for racing.  The club has had good numbers at Wednesday night training with 3 additions this past week but getting everyone to racing always is difficult in December.

The first event was the 1 lap dash against the clock.  For mots it appeared the hot Thursday had sapped the energy levels as times were not improving.  However, Matt Minogue followed up his great training efforts with a personal best.  For the A grade riders it was Tom McFarlane in 31.54sec ahead of Chris Rowe 33.40 and Kevin Feely in 35.79sec.  In the Junior group it was Matt Minogue at 35.71 sec, Austin Timmins 37.52 and Alex Bennett in 43.52sec. 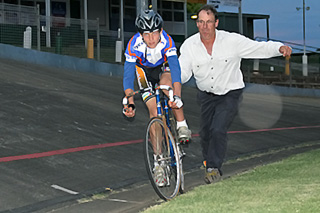 The handicap events were next up and the Junior event over 1 lap saw the backmarkers get up for the win – Matt Minogue (5m) 1st, Austin Timmins (15) 2nd and Alex (60) in 3rd.

The handicaps were changed for the 2 lap event and this time it was the limit rider Alex(150) getting the job done ahead of Austin (30)and Matt(5).

In the A grade group over 2 laps it was again the limit rider, Kevin Feely (85) riding strongly who greeted the judges 1st ahead of Tom (scr) and Chris (25).

In the A grade sprint it was a close battle up to the finish but Tom McFarlane was too quick for Chris and Kevin.  The handicapper had a surprise in store for the riders as he produced some team shirts and organised  riders in 3 teams of 2 riders for a short madison event.  This requires 1 rider from each team to race at any time and the race over 12 laps included a sprint at the half way mark and finish with the sprints carrying points for the placings.  The team of Austin Timmins and Chris Rowe eventually worked out the way to race the event and after claiming 2nd in the first sprint managed to win the last sprint and claim the event.  The second  placed team was Matt Minogue and Kevin Feely whilst Tom McFarlane and Alex Bennett were in 3rd place.

Continuing with the team racing, the riders were split in 2 teams of 3 riders for an Olympic sprint event.  This time the winning team was Austin, Matt and Tom who finished powerfully to just edge out Kevin, Chris and Alex.

Last event for an interesting night were scratch races.  The junior race over 4 laps saw Matt claim the win from Austin and Alex.  In the A grade race over 8 laps, the pace was kept pretty steady and at the bell, it was Tom leading from Chris and Kevin.  It looked like it was set up for Chris to grab a come from behind win however, Tom judged his efforts nicely and held of a desperate finish from Chris with Kevin further back in 3rd place.

Training is again scheduled for Wednesday night.  The extra numbers taking part has seen officials scrambling for more bike parts and looking at purchasing some more units for the younger and smaller riders.  However, we are still happy to see anyone keen to come and try.  There have been plenty of happy faces each Wednesday night and when they are all racing it means there is usually someone of similar ability to pit yourself against.