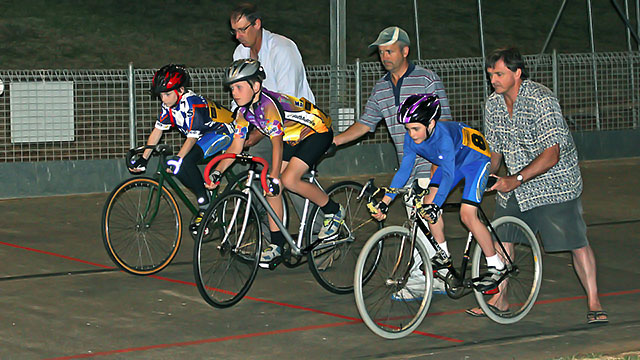 It was back to school this week and back to the track for a large number of riders.  State Titles over the weekend also meant some riders were missing on Friday night but we can report that Thomas McFarlane was moving well at Wednesday night training.  Club coach Tony Smith also has a surprise for Juniors Thomas Fitzgerald and Cody Cox as they moved from sneakers to bike shoes and clip in pedals. Thomas Fitzgerald showed the benefit of this new gear as he wiped over 2 secs of his previous personal best for the 1 lap time trial.  Austin Timmins is another who is continuing to break new territory with his times.

Scratch races were next up and Junior B3 lap results were Oliver, Fleur and Thomas.  In the Junior A 5 lap race it was Austin winning from Matt Minogue and Harrison McLean. For the seniors over 8 laps it was a win to Ronald ahead of Steve and Kevin Feely.

The riders then raced their handicap races.  In Junior B it was a fine win to Thomas just ahead of a fast finishing Fleur whilst Cody Cox finished determinedly for 3rd.  In the revised handicap it was Fleur winning from Thomas and Oliver.

“In the Junior A race over 1 lap it was a tear-away win to Bernadette Fitzgerald ahead of Zoe Veldman (Latrobe City) and Matt Winchester.”

In the Junior A race over 1 lap it was a tear-away win to Bernadette Fitzgerald ahead of Zoe Veldman (Latrobe City) and Matt Winchester.  After the handicapper re-set the marks it was a win to Harrison McLean from Zoe and Alex Bennett.  For the seniors the handicap was over 2 laps. First time around the results was Eric from Steve and Ronald Purtle.  Second time around it was Ronald from Kevin and Eric.

To keep speed in rider legs the riders were given some sprint heats.  First match up saw Thomas winning from Jack Allen and Cody.  Second time it was Jack Allan winning from Thomas and Cody.  In the other junior B heat first round it was Oliver with a narrow win over Fleur.  Even though she tried some different tactics second time round the result was the same.  In the junior A division Heat 1 saw Austin win from Matt Minogue and Harrison.  The second heat saw Zoe snatch the win on the line from Bernadette whilst in the third heat it was Alex Bennett flashing home to snatch the win from Matt Winchester.

“The junior A riders finished their night with an elimination ride.”

The junior A riders finished their night with an elimination ride.  Things were going well for the bunch until mid-way when Austin Timmins upped the pace and split the field.  The end result was a win to Austin with Zoe claiming second and Matt Minogue at 3rd.

The seniors had a 12 lap point score to finish the night with intermediate sprints at 8 and 4 laps to go respectfully.  However, the first sprint split the field with a very fit Kevin Feely keeping the pressure on to ride away with only Ronald Purtle handling the tempo.  The end result was a win to Kevin (13pts) from Ronald (11pts) and Steve Allen at 3rd with 2 points.