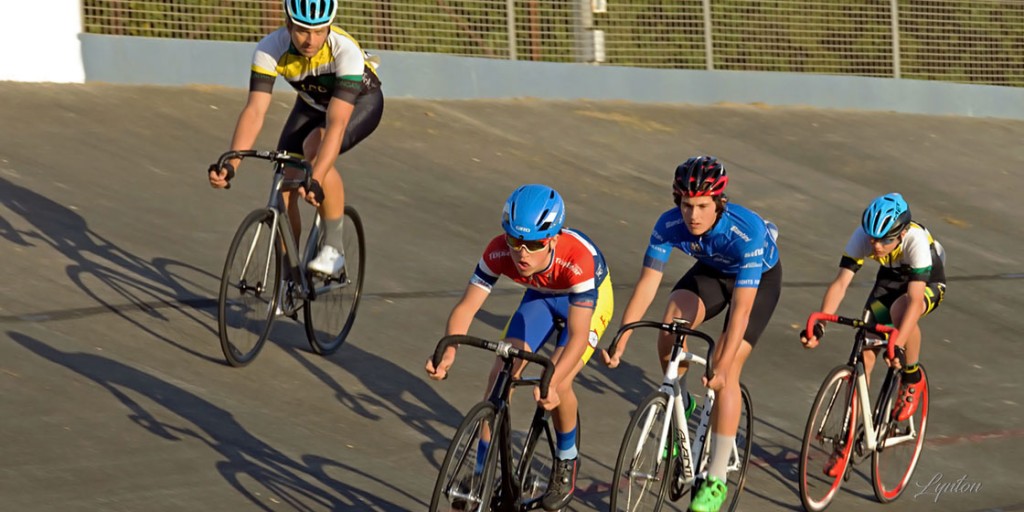 The riders have been making the most of the great weather in late summer with plenty of racing to be squeezed into the available time.  However, the Sunday morning racing at Warragul has finished and the Wednesday twilight races concluded also with the last race in that series at Dumbalk this last week.  Several of the club members scored overall placing for the 6 week event.  Some of the riders have moved on to tackle the Warragul club teams event on Saturday afternoon.

For the Leongatha riders the Club finished the track season on Friday night with a short program followed by some pizza and talking.  With a strong easterly blowing at the start of the evening the riders gave the time trial a miss and settled for a scratch race to start the evening.  In the A grade field Oliver McLean just edged out Steve Allen with Tom Fitzgerald in 3rd place.  In the B grade field, Jack Allen did better that dad Steve with a win ahead of Felicity Waddell and Caleb Murphy.

“Caleb (30) on limit also found some speed and endurance to lead for an all the way win from Felicity(15) and Jack (scr). “

The riders then had handicaps to race.  In the A grade 2 lap event, Oscar Bowler (80) raced strongly from the limit mark and never looked threatened to take an easy win ahead of a fast finishing Oliver McLean(15) and Tom Fitzgerald (50).  In their re-handicap race, Oscar was still suffering from his first effort and along with a new mark of (50m) was never a contender. However, Oliver McLean (scr) was up for the new challenge and led Steve Allen (scr) in for a win with Tom Fitzgerald (40) tiring in the last hundred meters fading to 3rd.  In the B grade 1 lap handicap, Caleb Murphy (30) on limit also found some speed and endurance to lead for an all the way win from Felicity(15) and Jack Allen (scr).  In the re-handicap, Caleb now on (15) again defied the pursuers and made it 2 wins in a row.  Felicity (5) was 2nd whilst Jack (scr) was 3rd.

The A grade riders had a 2 lap sprint and Tom Fitzgerald made a dash before the bell lap and opened up a good gap.  Oliver began the chase but found Steve Allen sweep past him to take up the chase.  This effort was successful giving him the win ahead of Oliver and Tom.  In the B grade event over 1 lap, Jack Allen dashed for the line as soon as the whistle was blown and took an easy win over felicity and Caleb.

Last race for the season was an elimination race for all the riders and produced some good rides by the B graders but at the business end it was Oliver McLean winning from Steve Allen and Oscar Bowler with a good ride for 3rd.

The Club has a Sunday March 19 session planned for the indoor track at Darebin so all the Club riders are invited to take the opportunity to try the indoor board track.  Members should contact the Club secretary to advise of their intention to take part and get the details.