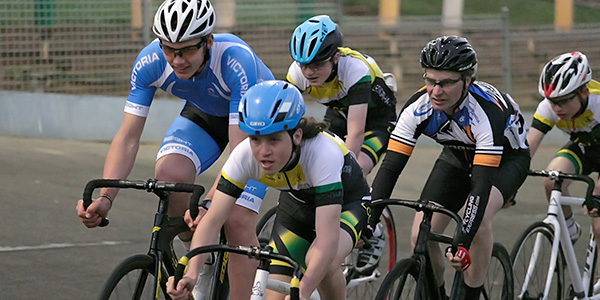 The summer track season racing kicked off on Friday night after two Wednesday night training sessions. Whilst the numbers at training have been good the starting fields on Friday night were on the light side. However the riders in attendance had good conditions with the track being reasonably fast after the warm day.

The usual practice is to start the night of with a 1 lap time trial to see how everyone is pedalling. Both Oliver McLean and Thomas Fitzgerald have started the season well as they both took around 1 second off their best time of last season. Both riders have grown and are also pedalling a changed gear as they step up an age group. Best time for the night was Austin Timmins at 31.62 secs. Next was Oliver McLean in 34.31sec followed by Thomas Fitzgerald at 35.72 sec.

The A grade 6 lap scratch race saw an easy win to Austin ahead of Oliver and Rob Waddell whilst in the B grade race it was Thomas Fitzgerald winning from Kaleb Jans and Felicity Waddell. With the riders sufficiently warmed up the handicapper had them tackle some 1 lap handicaps. In the B grade race it was Felicity winning from the 50m mark and Thomas (scr) flying home to snatch second right on the line from Kaleb (30m). In the A grade handicap Austin (scr) had the field covered after 200m and duly cruised in for an easy win from Oliver(25) and Rob (40).

The handicapper provided some revised marks for a second instalment of races and this time in B grade it was Kaleb (45) winning from Thomas (scr) and Felicity (35) in 3rd. In the A grade race Oliver(45) managed to hold off the fast finishing Austin (scr) who just caught Rob (60) before the line.

The riders were split in to 3 rider teams for an Olympic Sprint over 1.5 laps. In a close contest Oliver, Thomas and Rob were just ahead at the finish from Austin, Felicity and Kaleb. This event was followed by an elimination race which saw some close calls on the early eliminations. However, at the end it was Austin winning from Oliver and Thomas.

Kaleb and Felicity were then paired up for a sprint and Felicity was keen to make sure she secured the win as she figures the sprints suit her better than the distance events. The other riders finished the night with an 8 lap scratch race. This was run at a steady pace and that saw all riders in contention for the finish. In the dash to the line it was Austin winning from Oliver and Thomas.

Training will again be on for Wednesday night, weather permitting and hopefully some of the new riders may transition to Friday racing after this week. Some new riders are still coming to start so if anyone is interested the club can help with a track bike. Just show up at 6.00pm and the officials and Club Coach Tony Smith will get you a chance to try track cycling – it’s a different buzz to road riding.