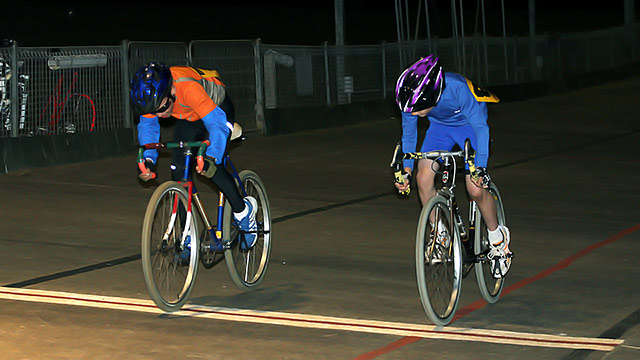 Oliver has the win in a very close finish with Thomas – Junior B match sprint. (55 event images)

While the night was cold there was no rain and only light wind. An enthusiastic if smaller bunch of riders fronted for a full evening session of competitive racing. There was a happy buzz in the air and most riders were enjoying the challenges of different racing formats.

“The night started excitingly with a 10 lap scratch race for seniors.”

The night started excitingly with a 10 lap scratch race for seniors. Five boys started with young Thomas McFarlane and Will Lumby mixing it with the older Steve Allen, Ronald Purtle and Kevin Feely. Kelly Hamilton also started but she wasn’t able to match it with the boys. In the end Thomas was too good for Steve with Kevin third.  A Junior A scratch race was then held over 4 laps with 4 boys and 3 girls. Matt Minogue was triumphant in 2min 51.7sec. He was followed home by Harrison McLean and Aaron Fraser. The first girl home was Grace McLean in 5th. The Junior B scratch race over 2 laps had 4 boy riders. Jack Allen led them in with Oliver Schmidt 2nd.

The excitement then went up a notch as all riders were given individual time trials over 1 lap. Thomas McFarlane crept a little closer to breaking the 30 second barrier with a slick 30.37sec. Ronald Purtle was closest of the rest with 31.17 followed by Steve Allen in 32.68sec. Of the juniors Matt Minoge did a quick 34.03, Harrison McClean a 36.27 and Aaron Fraser 36.79sec.The quickest of the girls was Grace McLean in 39.42 followed by Bernadette Fitzgerald in 40.78.
A Seniors Handicap over 2 laps was contested with the 5 senior boys and Kelly Hamilton. Kelly had 150m start but it wasn’t enough as Thomas McF (on scratch) zoomed around and swept all riders up ahead of him in the excellent time of 59.30sec. Second was Ronald and 3rd Will. Next was a Junior A Handicap over 1 lap with 4 boys and 3 girls off different handicaps. First home was Bernadette off 55m followed by Aaron off 30m then Brielle off 65m. The Junior B Handicap was then raced over 1 lap with 4 riders. First in was Cody off 45m, 2nd Thomas Fitz off 10m and 3rd Oliver Sch off 15m.

A series of elimination races were then held where, after 2 laps, one rider at the back is eliminated after each successive lap until one is left and is declared the winner. In the Senior Elimination with 5 riders the winner was Thomas McF, Steve Allen 2nd. In the Women’s Elimination with 4 riders Grace was 1st with Bernadette 2nd. In the Junior A with 4 riders, Matt Minogue was 1st with Harrison Mclean 2nd. In the Junior B again there were 4 riders and Thomas Fitz was 1st with Oliver Schmidt 2nd.
A series of 2 lap sprints were then contested, mostly between 2 riders. First up Thomas McF defeated Ronald. His final 200m was a quick 13.24sec. Next up was the 3 riders Steve, Will and Kevin. Will was too good with Kevin close behind. Now it was the juniors with Matt M accounting for Harrison, Grace accounting for Bernadette, Aaron too good for Alex, Brielle beating Grace and finally Thomas Fitz beating Jack with Oliver close in 3rd.
A series of Scratch races for Junior Boys then Women followed. The 4 riders of Junior A (5 laps) resulted in a victory for Matt M, Harrison 2nd. Junior B boys saw Oliver win ahead of Thomas, Jack 3rd. The 4 riders in Women’s Scratch (3 laps) saw Grace win with Bernadette 2nd.
Finally the 5 senior boys set off on a 12 lap motorpaced event. Each lap the motorbike increased the pace until 1 ½ laps from the finish he pulled off the track. Once again Thomas McF had the finishing speed to come out winner. Ronald held on for 2nd with Kevin happy with 3rd. If this wasn’t enough Thomas McFarlane hung around after the meet to complete 2 further sessions of 8 laps each of motor pacing and was circling the veledrome at a remarkably high speed.
The raffle tonight was won by cycling Coach Tony Smith. He assured all there that he would bring along his fancy cake winnings and share it around at training at the veledrome next Wednesday night.