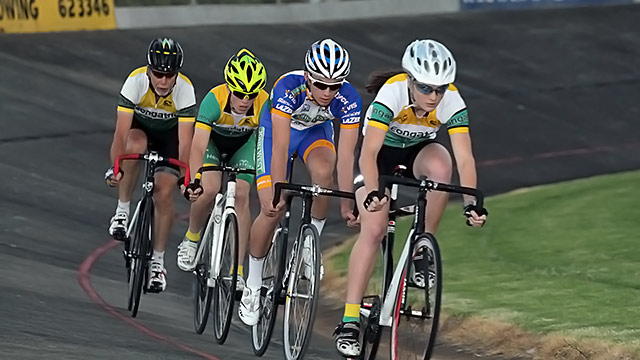 A warm Friday evening saw the club conduct the junior club titles in a varied format evening.  The club titles are raced over three events – 500m time trial, sprint and scratch race.  Competitors gain points in each event and the points tally gives the overall placegetters.  The titles are run in age categories.  At the completion of the titles the riders competed in their more traditional events.  However, the senior riders received some skills training in madison team changes with Thomas McFarlane and Will Lumby providing demonstrations of the skill set to be acquired.  The new riders were then given the chance to practice the art of the hand sling to change riders. 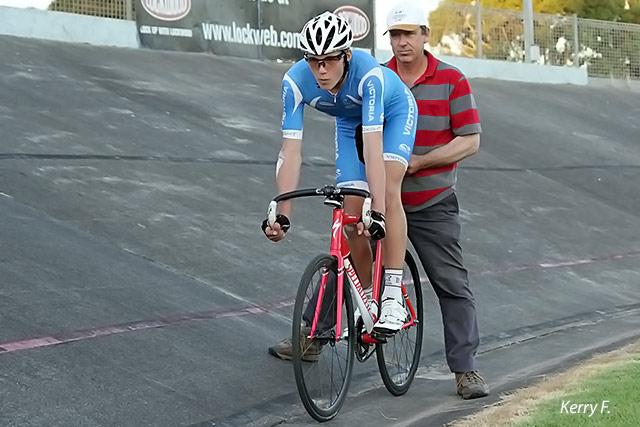 ‘Austin answered the challenge from Will with a slick 37.89 sec”

The riders were racing in Under 17, Under 15 and Under 13 age groups.  In the Under 17, there was a good battle between Austin Timmins, Will Lumby and Grace McLean.  In the opening event Austin Timmins answered the challenge from Will with a slick 37.89 sec 500m time trial.  Will was at 38.48 and Grace 42.66sec.  In the sprint round, Austin Timmins just managed to come round Will and Grace.  However, in the 2km scratch race finish, it was Will who managed to reverse the tables.  The overall result saw Austin the winner from Will and Grace.

In the Under 15 division, the 500m time trial saw a win to Thomas Fitzgerald in 49.07, just ahead of Fleur Timmins 49.24, Oliver McLean 49.35 and Michael Eastwood at 51.30sec.  In the sprint rounds Thomas won heat 1 ahead of Michael whilst heat 2 went to Oliver ahead of Fleur.  The final round saw Oliver take the win ahead of Thomas whilst in a narrow result Fleur took the heat for third place.  This left all with a chance of a medal depending on the scratch race.  Oliver hit the front after the bell to take out the scratch race.  Thomas lead home the others for 2nd whilst Fleur knew she would be challenged by Michael and delayed her effort until the last which saw her grab third by half a wheel.  The overall points tally saw Oliver champion with a 1 point margin over Thomas whilst Fleur secured the bronze. 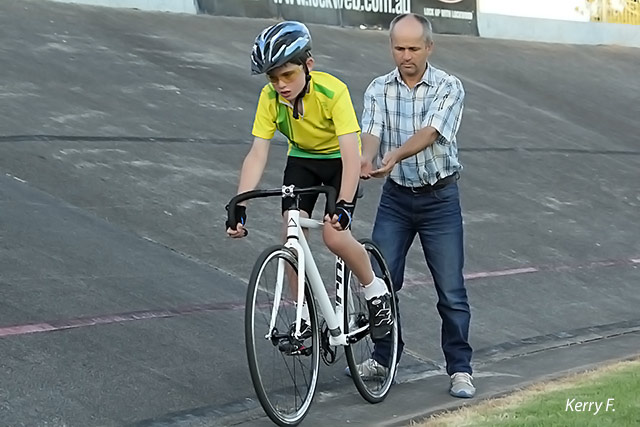 In the Under 13 division, the competition was again keen.  Max Slinger, had a baptism of fire in his first night of racing but rode well.  The time trial went to Kaleb Jans in 52.33sec ahead of Josh Wight 56.36 and Max at 59.82 sec.  In the sprint, a close result went to Kaleb ahead of Josh and Max.  In the scratch race the outcome was the same.  This left Kaleb the overall winner from Josh and Max.

The seniors present rode a 500m time trial.  Harrison clocked 39.82sec, Bernadette Fitzgerald at 42.52 and Kevin Feely at 42.86 sec.  In the 6 lap scratch race Thomas McFarlane joined in and cruised to a victory ahead of Harrison and Kevin.

After the titles were complete the juniors raced a 1 lap handicap.  With a wall of riders heading to the line it was Josh Wight(30) who claimed a narrow win ahead of Michael Eastwood (20) and Kaleb Jans (30) in third.  In the senior handicap over 2 laps it was another very tight finish with Kevin Feely gaining a narrow verdict over Grace McLean and Harrison McLean.

The final race of the night was a junior elimination.  Oliver McLean answered all the challenges to take the win from Thomas and Fleur.

Some riders were in action at Newborough on Sunday whilst riders have been busy on the roads of a weekend.  Wednesday night training continues to see new riders looking to try out the racing so it is producing a potential bunch of young riders moving from the track to road season later in March.