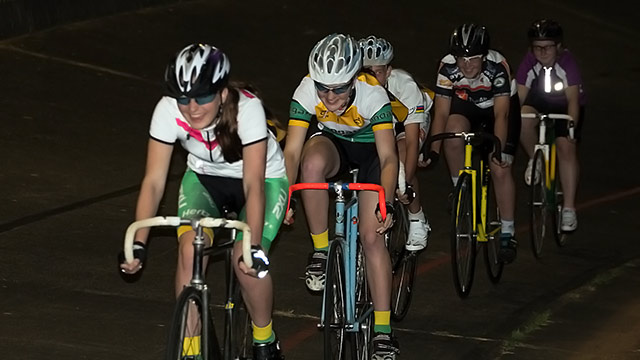 It was a perfect night for racing after a very warm afternoon. There were more riders than the first week willing to compete in the perfect conditions, with 4 senior and 14 juniors, including 4 riding for the first time. Tony Clark was in control of the evenings racing and the excellent handicapping had parents calling-out encouragement to those competing, all making for an exciting night of racing.

The perfect spring conditions experienced on Friday led to a big turnout of riders for racing this week. Balmy and still conditions were conducive to some great racing and a very pleasant night for spectating.

>Eighteen riders across Senior and Junior grades entered and started the evening with the traditional 400m time trial to help sort out the grades and handicaps for the later races.  Oliver McLean arrived late after HPV training, but managed to record the quickest time for the Junior B Grade event, scorching around the track in 39.73.  He was closely followed by Fleur Timmins in 41.28 and Thomas Fitzgerald in 41.42.  Junior A Grade was taken out by Bernadette Fitzgerald in an impressive 35.83 from her fierce rival Grace McLean who rode the lap in 36.33.  Matt Winchester took third in 39.41.  The Senior event was won by Austin Timmins in a smart time of 31.51. Will Lumby took a very close second with 31.73 while veteran power house Steve Allen blitzed home in 32.16.
Junior riders then lined up for a couple of one lap handicap races.  Katherine Fitzgerald took out the first Junior A Grade race off 45 metres, beating home Grace and Bernadette.  In the Junior B race Kaleb Jans led from start to finish to take an impressive win from fellow out-marker Josh Wight and then Thomas Fitzgerald.  In the second handicap race it was Jack Allen who took the win this time from Josh Wight and Kaleb Jans, proving that these three young guns are hard to beat when given a head start.  Unfortunately for Jack his shoe would later disintegrate and force an early end to his racing for the night.

The first Senior Handicap over one lap was won convincingly by newcomer Dylan Adams from 40m.  Steve Allen powered through the field to take second from Rob Waddell.  The second handicap for Seniors was over two laps and saw a different result as the longer distance the scratch men.  Austin Timmins took a narrow win from Will Lumby with Dylan Adams taking third.
Riders then returned for some sprint races to test not only their speed but their tactics and awareness of other riders.  Felicity Waddell took a solid win in the first Junior B sprint from Kaleb Jans and Josh Wight.  Thomas Fitzgerald won the second Junior Brace from Oliver McLean and Fleur Timmins.  In the Junior B races Katherine Fitzgerald and Grace McLean both had strong wins.  The first Senior sprint was a classic.  Youngster Harry McLean tried to push his experienced opponents up the track with 250m to go but forgot to factor in the guile of Dylan Adams who took the trio by surprise and took off the record a good win.  In the second sprint Austin Timmins proved too quick for Will Lumby and Steve Allen.

Elimination race – Rob your out!

Senior riders finished off with two longer events, an elimination race and an eight lap scratch race.  There is nowhere to hide in an elimination race as Dylan Adams soon found out, having his number called after the first sprint to the line.  He was soon joined by Rob Waddell, Kevin Feely and Will Lumby leaving strongman Steve Allen to battle it out with teenage superstars, Austin Timmins and Harry McLean. Steve was too smart for Harry, sending him packing, but couldn’t out-wit the Victorian representative Austin who took a well-earned win.  Austin then turned around and backed it up with another win in the scratch race from Will Lumby and a recovered Dylan Adams.  Overall it was a great night of racing in perfect conditions.
Several hardened competitors even had the energy to front up for a 75km training ride early the next morning.  Harry McLean showing he is very much at home in the hills around Mirboo and Mardan.