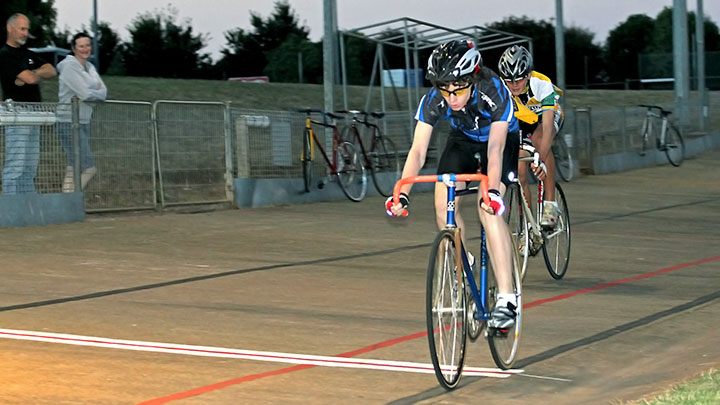 Club titles were held for the junior riders with a warm and still evening making it a good night for all.  Senior riders have been scarce since the Christmas break but there was a good number of juniors for the racing on Friday night.  The juniors raced as a junior under 17 group with 5 starters and junior under 11 group with 3 starters.

“The juniors then moved into some sprint racing.”

The juniors then moved into some sprint racing.  For the younger trio it was a 3 up event and it was a battle right to the line with Fleur winning from Thomas and Cody.  In the older group, the first heat saw a win to Matt Minogue whilst in the second heat it was a win to Austin Timmins.  The two winners moved through to race each other and again it was Matt Minogue who came up with the win.  In the race of for third it was Aaron Fraser who landed the win ahead of Alex Bennett and Matt Winchester.

The senior duo raced 2 sprint heats and both times it was Kevin Feely showing better tactics and better leg speed who claimed the wins.

“it was Fleur who raced away to grab a clear win over Thomas and Cody.”

The Under 11 trio fronted up for a 3 lap scratch race and after a couple of quiet laps it was Fleur who raced away to grab a clear win over Thomas and Cody.  The under 17 scratch race over 5 laps saw a similar outcome with Matt Minogue controlling the event and then slipping away after the bell to win easily.  Austin grabbed second ahead of Aaron, Alex and Matt.W.

The under 11 trio had a 1 lap handicap and Cody Cox used his handicap well to claim the win ahead of a fast finishing Fleur and Thomas.  In a re-handicapped race it was Fleur who flashed down the straight to just pip Cody and Thomas.  The Under 17 group raced a 2 lap handicap and Matt Minogue showed great form as he managed to give away handicap starts out to 120m and still win.  Alex Bennett put in another great ride to grab 2nd ahead of Austin.

The senior duo road a 6 lap scratch race and once again it was Kevin who proved too smart and quick at the business end for Geoff.

In the last race for the junior trio it was Fleur who again found a way to win ahead of Thomas and Cody.  The Junior Under 17 group raced an elimination race for the last event.  This proved to be entertaining with Matt Minogue fighting back in the last 50m to outsprint Austin whilst Alex Bennett just previously had produced some good moves to secure him the third place.

The overall results for the club titles in the under 17 were Matt Minogue – Gold, Austin Timmins – Silver and Aaron Fraser the  Bronze.  Whilst for the Under 11 it was Gold to Fleur Timmins, Thomas Fitzgerald with the silver and Cody Cox with the bronze.

On Friday 22 the club will join the Warragul club for some Friday night racing.  This will be a new venture for most of the junior members and a good chance to see some other riders and another venue.