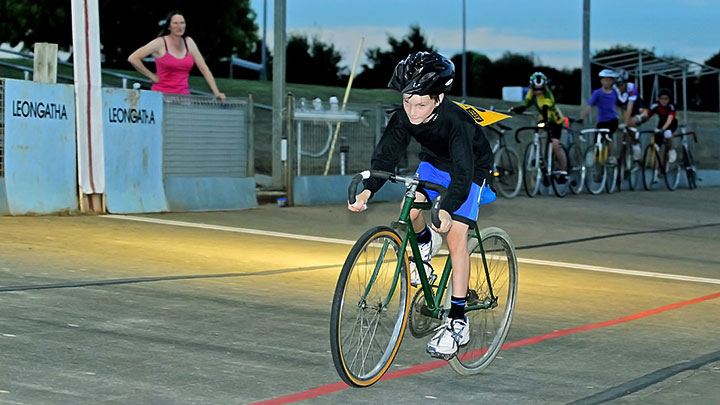 Cody starts his time trial  – 57.08sec.  (back on the Velodome after a training accident)

The last night of the current track season was held on Friday night.  It was a warm and still night and conditions at the track were as good as it gets.  The race times were exceptional with most riders chalking up their best times for the season.  The night also saw the running of the senior club titles, a presentation from Seight Clothing of their new club clothing and to finish – some pizza in a social gathering.

The first event of the night was the 1 lap time trial for the junior riders.  Matt Minogue who had been edging closer to breaking the 35 sec mark chimed in with a 34.53 sec lap so was very pleased.  Aaron Fraser had been in a similar position with the 36 sec mark and found the 35.20 most pleasing.  Austin Timmins clocked a 36.94 sec lap for a new PB, Matt Winchester at 40.47 sec  and Alex Bennett at 40.92sec were also new PB’s.  Thomas Fitzgerald was inspired by the older riders and saw a new PB as well – 47.03 sec.  Fleur Timmins had 49.45 and Cody Cox a 57.08sec lap.

In the senior title the riders stepped the distance out to 500m.  Thomas McFarlane just back from his National Titles campaign was in sizzling form and clocked a 35.95 sec time.  Comparing this to his previous times for the 400m it was probably equivalent to a 29sec lap and the first time any of our club members have gone under the 30sec mark.  Ron Purtle, back after some injury time out clocked a 37.71sec time, Geoff Fraser 42.75 and Kevin Feely 43.42sec.

“The younger trio were given a 2 lap scratch race.  Fleur took the win from  Thomas and Cody.”

The younger trio were given a 2 lap scratch race.  Fleur took the win from  Thomas and Cody.  In the junior 4 lap scratch race Matt Minogue went for the run just before the bell and caught the field by surprise so cruised to an easy win.  Austin grabbed 2nd from Aaron.

Then it was onto the sprint rounds for the seniors.  There were no surprises as the final came down to Thomas McFarlane and Ron Purtle.  In the first heat Thomas incurred the displeasure of the referee and was forced to a second and third heat to come up with the win.  Kevin Feely managed to secure third overall.

A 1lap handicap for the younger trio saw Cody get home for the win ahead of Fleur and Thomas.  In their later rerun with new handicaps it was a determined Thomas who grabbed the win from Cody and Fleur.

The juniors raced a 2 lap handicap and this saw Austin Timmins put last weeks pulled foot behind him to race strongly for the win ahead of Aaron and the fast finishing scratchman Matt Minogue.  In their re-run race it was once again Austin claiming the win even though he had been pulled 20m  Matt Minogue again put in a big effort to claim 2nd just ahead of Alex Bennett.

This group also had an elimination which is always keenly contested.  Aaron Fraser found himself boxed in at the first elimination and saw his chances disappear quickly.  Matt Minogue controlled the race and took the win from Austin and Alex.

The junior trio raced a 2 lap scratch race and this produced a challenge right to the line.  Fleur proved the strongest finisher ahead of Thomas and Cody.

“The junior riders has a 6 lap scratch race for their last race of the season.”

The junior riders has a 6 lap scratch race for their last race of the season and Matt Minogue grabbed the win.  Aaron, who had a few less laps in the elimination finished well to grab 2nd ahead of Austin.

The seniors raced a 10 lap scratch race for their last race and Thomas McFarlane wrapped up the Title win by claiming this event along with the time trial and sprint evens.  Ron Purtle was 2nd and 2nd in the Titles and similarly with Kevin Feely for third.