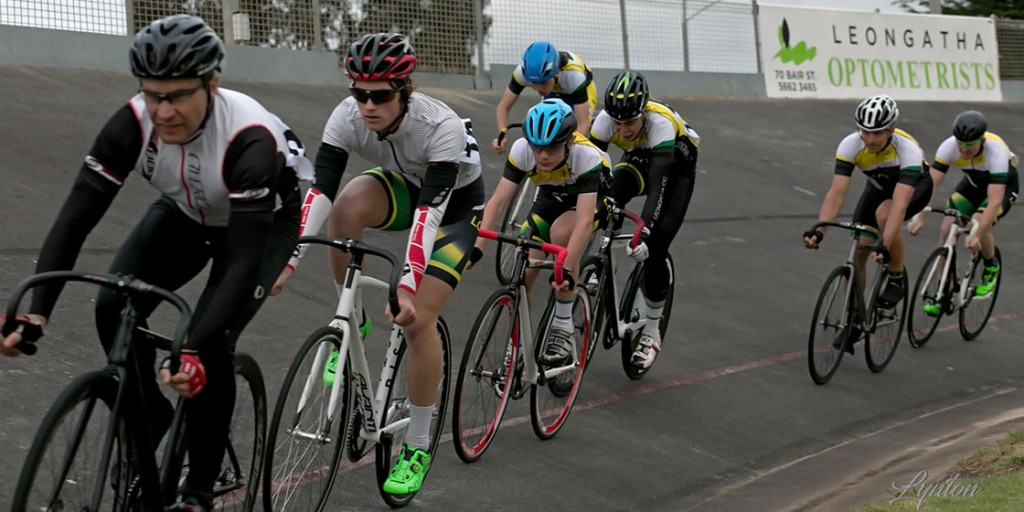 In what has become a regular pattern the Friday night racing had riders warming up in cool conditions with a cold southerly wind blowing. However, by around 7.30pm the wind had dropped and conditions were pretty good for riding. The club welcomed in several riders for the first night of racing – Oscar Bowler, Isabella Tomkinson and her dad Simon. In the first event, the 1 lap time trial, several riders managed to post season best personal times – Nick Blogg, Felicity Waddell, Oliver McLean and Jack Allen. In the A grade group, the best time went to Gavin Slavin 32.76, followed closely by Steve Allen 32.83 then it was out to Oliver at 34.41 sec. In the B grade group, the best time went to Jack Allen 37.30sec, Felicity Waddell 38.71 sec and then it was out to Caleb Murphy at 44.44 sec. However, Caleb does not have “click-in” bike shoes and cannot get the legs loaded like the other cyclists.

In the B Grade 4 lap scratch race Caleb Murphy stole a march on the field coming up to the bell and was able to hold the advantage to the line. Felicity finished 2nd and Jack third. In the A grade 9 lap scratch, Steve Allen made it 2 weeks in a row with a narrow win over Gavin whilst Thomas Fitzgerald grabbed 3rd place.

The B grade riders had a 1 lap handicap and Jack Allen (10) stormed home to grab a narrow win from Isobella Tomkinson (75) and Felicity Waddell (scr) in 3rd. The handicapper adjusted the marks and sent them out again and this time it was Isobella (70) leading all the way to win from Caleb Murphy (50) and Felicity (10).

With 9 riders in the A grade field there were not enough pushers to run a handicap so the field were sent out for an elimination race. Thomas Fitzgerald dashed clear of the field after the first lap and opened up a gap of around a half lap on the field. This kept him out of trouble with the elimination tactics but also meant nobody chased him down so he rolled in for a convincing win. Meanwhile behind in the bunch the pressure was on but Gavin Slavin managed to secure 2nd ahead of Steve Allen.

The A graders were given a round of sprint heats. Michael Blogg secured the win over Simon Timkinson in heat 1. Kevin Feely had a photo finish win over Rob Waddell in heat 2. Oliver McLean made sure he controlled his heat to win from Thomas and Oscar and in the last heat, Steve Allen had a narrow win over Gavin Slavin.

The B grade riders were also given a sprint round. In heat 1, Nick Blogg took the honours from Isobella whilst in heat 2 it was jack Allen winning from Felicity and Caleb.

For the second week running, the A grade riders were given a ‘tempo’ race over 12 laps. This race gives 5 laps of a mass start race before 7 laps scoring points – 2 points for the first over the line and 1 point for the second rider over the line each lap. Thomas Fitzgerald once again moved away early an secured 3 firsts over the line with Oscar Bowler chasing him down and picking up 2 points. However, just prior to Thomas claiming his 4 line lead, the bunch chased him down and Oliver McLean moved to the front and claimed line wins. At the race conclusion it was Oliver with 10 points winning from Thomas on 6 points and Kevin Feely on 2 points and equal with 3 others getting the final placing as he was best placed at the finish.

The B graders had an elimination which saw Caleb Murphy exit early and this left Jack Allen taking the win from Felicity and Nick Blogg riding well securing 3rd.

Next Friday, weather permitting, the season will end with a BBQ after the racing.